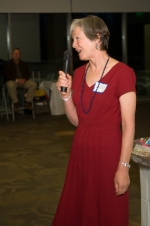 October 9, 2011 (Rancho San Diego)—The Water Conservation Garden’s Executive Director, Marty Eberhardt, has announced her retirement, effective February 1, 2012, after over seven years of service to the non-profit organization. Eberhardt has been the Executive Director of The Garden since August 2004.

She was named an Outstanding Citizen of the Year by East County Magazine for her efforts on behalf of educating the public about water conservation measures.

During her tenure as The Garden’s first executive director, the organization’s programs and exhibits and its acclaim both locally and nationally have grown tremendously. Educational offerings were increased from just one class per month to over 60 offerings annually, and the Ms. Smarty-Plants K-8 education program grew to serve over 28,000 students in the last year. Twelve of the 20 current Garden exhibits were either completely remodeled or added under her direction, the staff grew from 3.5 full-time equivalents to 7.0 full-time equivalents, and a cadre of 90 active volunteers blossomed from an original group of 15.

The American Public Gardens Association recognized The Garden as one of eight public gardens in North America to be a model for public outreach, and in 2009, Sunset Magazine declared The Water Conservation Garden as one of the “Top Ten Gardens in the West”--a truly extraordinary achievement given the number and diversity of much larger Gardens in the region.

Eberhart’s vision for The Garden led her to create its first two strategic plans, which were completed with input from staff members, the board of directors, and affiliated water agencies. On January 1 of this year, Eberhardt saw The Garden through a successful transition from governance by a Joint Powers Authority to governance by a non-profit organization. When asked about her tenure at The Garden, Eberhardt said, “It has been a privilege to work with some wonderful people- board, staff, and docents- on an issue of such importance to the future of San Diego and the greater southwest- conserving precious water resources.”

Friends of the Water Conservation Garden Board President, Richard Wright, said, “Under Marty’s leadership the Garden‘s programs and public profile have dramatically increased. Without question, her retirement is a huge setback in The Garden’s efforts to advance the cause of water conservation in the San Diego region. A search for a new director will begin immediately, but Marty has knowledge, experience and expertise that will be difficult to replace.“ An official search for a new Executive Director will begin by mid-October.

Eberhardt holds a Masters in Education in Biology from the University of Arizona, Tucson, Arizona. Her long career in nonprofit management included fifteen years at the Tucson Botanical Gardens, including twelve as Executive Director. She will spend the first six months of her retirement on sabbatical with her professor husband, and then plans to find new ways to contribute to the San Diego community.

Opened in 1999, the Water Conservation Garden at Cuyamaca College is dedicated to promoting water conservation in the southern California landscape through excellent exhibits and programs that educate and inspire the public. The Garden is supported by memberships, donations, grants, and water agency support. For more information, visit www.thegarden.org or call 619-660-0614x10.