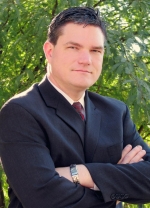 John Bolthouse, III, is a native of Louisiana with extensive experience working in the non-profit sector, most recently as executive director of the La Jolla Historical Society from 2006-2012.

From 2000-2006, he worked at the San Diego Air & Space Museum, first as head archivist then as curator and chief operating officer. Bolthouse holds a bachelor’s degree in Air Transportation and Aviation Sciences and a minor in history from Northeast Louisiana University, and completed his MA in Nonprofit Leadership & Management from the University of San Diego in 2008.

Richard Wright, Water Conservation Garden board president, said Bolthouse’s broad range of skills in non-profit management and extensive fundraising experience impressed the search committee, staff, and volunteers that were involved in the interview process. “John has a successful history of leadership and development in the non-profit sector that will serve The Garden well,” Wright said. “He knows the San Diego region and his skills will be invaluable in our efforts to continue building both awareness and support of the important work The Garden does.”

Bolthouse lives in San Diego with his wife, Melissa, and both have been members of The Water Conservation Garden since 2011. Their initial visit to The Garden inspired the Bolthouse’s to retrofit their landscape to be more drought-tolerant, so The Garden’s mission is a personal passion.

“I am sincerely grateful to The Water Conservation Garden’s governing board for the opportunity to lead such an exceptional community organization. Marty Eberhardt and her staff have created one of the most appealing cultural and educational institutions San Diego County has to offer. I am very impressed with the pride that the board, staff and volunteers have in the Garden and their confidence in the future—exactly the organizational culture I want to be a part of,” said Bolthouse.

Bolthouse also serves on the board of directors of the San Diego Museum Council, of which The Garden is a member, and is a member of the American Association of Museums and Society for Military History. He was archivist and assistant curator at the Lone Star Flight Museum in Galveston, Texas. Bolthouse will assume the executive director position at The Garden on February 21, 2012.

Opened in 1999, the Garden is dedicated to promoting water conservation in the southern California landscape through excellent exhibits and programs that educate and inspire the public. The Garden is supported by memberships, donations, grants, and water agency support. For more information, please visit www.thegarden.org or call 619-660-0614x10.