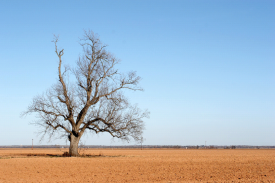 The State Water Project warned today it will not deliver water to its customers. The federal Central Valley Project—the largest single supplier of agricultural irrigation water in the state—is expected to do the same, unless significant rainfall occurs before its first allocation announcement next month.

“Under current conditions, we expect hundreds of thousands of acres of land in the Central Valley to go unplanted,” Wenger said. “That will cause severe economic problems in our rural regions—loss of jobs and economic activity, with all the heartache that entails.”

Like many Californians, he said, farmers and ranchers have improved water use efficiency significantly in the years since the previous record drought of 1977. Since 1980, for example, the amount of water applied to agricultural land in California has gone down 24 percent while tonnage of crop production has increased 34 percent.

“We’re consistently achieving more crop per drop. But greater efficiency can only go so far, and when water allocations drop, oftentimes the only choice for farmers is to reduce production. Farmers will face many difficult choices in coming weeks,” Wenger said.

He said Farm Bureau will work with state and federal government agencies to seek effective responses to the water crisis, in both the short term and the long term.

“Fish and wildlife will also suffer from lack of water. Many of these negative environmental impacts could have been avoided if California had done a better job of planning for dry years, including construction of new surface storage facilities. It’s a mistake we can’t afford to continue to repeat,” Wenger said.

“We hope the announcement will focus Californians’ attention on the immediate need to improve our outdated water system,” he said. “Our current crisis shows that California must invest in more water storage, so we can better cushion ourselves against damage caused by drought and against long-term variations due to climate change. It is time to pass a bond measure that includes new surface storage projects.”

The California Farm Bureau Federation works to protect family farms and ranches on behalf of nearly 78,000 members statewide and as part of a nationwide network of more than 6.2 million Farm Bureau members.