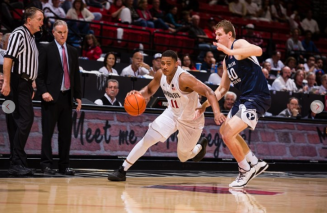 That didn't keep the renewal of the series from being any less spirited.

Devin Watson scored 23 points and Matt Mitchell had 22 to lead San Diego State to a 90-81 victory against BYU on Saturday.

Jeremy Hemsley scored 14 points and Jordan Schakel scored 12 for SDSU (7-4), which jumped to a double-digit lead in the first half thanks to a tight defense that helped set up the 3-point shooting of Mitchell and Watson.

It was the first time BYU played at San Diego State since Feb. 26, 2011, when Jimmer Fredette scored 25 points to lead the No. 7 Cougars to an 80-67 victory against Kawhi Leonard and the No. 6 Aztecs. SDSU beat BYU in the championship game of the Mountain West Conference tournament that season, and the Cougars then left the conference. The teams last met in the 2014 Maui Invitational, with SDSU winning 92-87 in double overtime.

"Felt like old times in the building today," SDSU coach Brian Dutcher said. "The atmosphere was incredible. People want to know why you start well. Sometimes that energy in the building gives the team energy. I told the players before the game, `The fans know more about this rivalry than you do. You have to know this is a rivalry. I'm telling you it is.'

"It's been one of the great ones in the Mountain West," Dutcher added. "Sometimes it's a rivalry when they beat you nine times in a row. Well now we've got three in a row. That's the kind of talk that keeps a rivalry going."

"Playing against BYU is a fun game," Watson said. "The fans come out, it's a fun atmosphere."

Watson played his first two seasons at the University of San Francisco before transferring, and lost four times to BYU.

"I wanted to beat them. I knew I wanted to get one. I was 0-4 and had to get the last one and I'm glad I did it here with this group of guys," Watson said.

"We walked into the building last night and it seemed like we've been doing this forever," BYU coach Dave Rose said. "It didn't seem like it's been eight years since we've been here. I'm glad we got the series going again. It's good for us. We played in Maui a few years ago and I think it'll be fun to get them back in Provo next year."

Although it was the first time at Viejas Arena for the BYU players, they knew what to expect.

"They don't like us," BYU's Luke Worthington said. "I watched some BYU growing up when they were playing San Diego State. It was quite the rivalry. I know it's a fun game. There's no real bad blood, just fun and antics and people cheering and making signs."

TJ Haws scored 18 for BYU (8-6), while Jashire Hardnett had 12 and Luke Worthington and Yoeli Childs 11 apiece.

BYU committed 11 turnovers in the first half and 18 overall.

"We turned the ball over so many times early," Rose said. "That led to wide-open 3s, which got us in a hole. After we kind of settled down a little bit in the second half I thought we played much better. But they had a great plan. Dutch did a terrific job of taking the O out of the offense. Defensively, they did a really good job of covering our other guys. I don't know if we've had another game where we turned it over 18 times."

Watson made all three of his 3s in helping SDSU take a 25-11 lead. Mitchell made a long 3 and a nice left-handed layup, and Schakel followed with a 3 for SDSU's biggest lead, 33-13 with 11 minutes before halftime.

The Aztecs seemed to play with more energy and focus than they have recently. Part of that was probably facing an old league rival and part of it was probably having nine days off during finals.