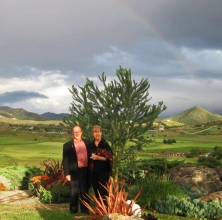 Amazingly, both ends of the rainbow were visible simultaneously at opposite ends of the field, transforming the rural area into a magical scene.

Alas, we couldn’t find that proverbial pot of gold at the rainbow’s end.