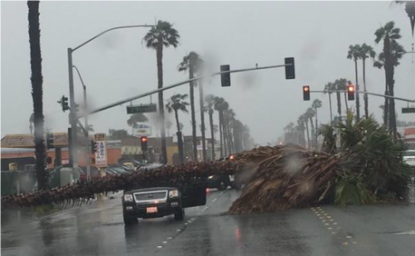 February 14, 2017 (San Diego) – It’s tough to top the extreme storms that hit our region in January. But this weekend, the National Weather Service warns that storm conditions starting Thursday night could be as severe as the January 20th downpour—with additional hazards including a tornado that could strike coastal or inland San Diego County on Saturday.

The forecast includes lightning on beaches and coasts as well as valleys, with waterspouts and an isolated tornado possible on Saturday.

Frequent lightning throughout the two days are forecast, along with small hail, damaging winds Friday and heavy rains. Flash flood and river flooding could occur with rainfall as heavy as three quarters of an inch in an hour.  Debris flows and mudslides may occur from recently burned areas.

Watch for toppled trees and power lines as rainfall saturates the grounds and heavy winds sweep in with gusts up to 65 mph.

Heavy snow is forecast above 5,000 feet, with the snow level dropping to 4,500 feet by Saturday.  Above 6,000 feet, up to two feet of new snow may fall—bringing good news for skiers at Southern California resorts. Mountain areas are also expected to have dense fog.

Avoid travel if possible; if you are on the road, check traffic reports for road closures.

There are also hazardous marine conditions with near-gale force winds and rough seas.  Damaging surf up to 15 feet could cause coastal flooding.