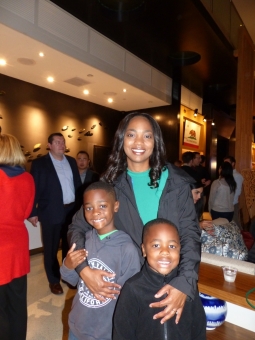 A key factor in the race may have been negative mailers sent by Public Safety Advocates, a PAC, targeting Weber and Myers with outright falsehoods in Weber’s case and half-truths regarding Myers. The tactic generated considerable attention on social media and may have backfired. Weber may also have benefitted from a trend toward electing women this election both locally and nationally.

La Mesa voters are, however, famously independent, voting for individuals over partisan politics. They’ve previously reelected a councilmemberwho changed parties and another who made a cross-party endorsement in a presidential race (neither are still in office). The current council is East County's only truly nonpartisan board, with two Republicans, one Democrat, and two members who recently left the GOP to become indepedent decline-to-state party affiliations: Kristine Alessio and Mayor Mark Arapostathis.

Mayor Arapostathis, despite his lack of party affiliation, had no opponent in this election and waltzed to victory.

If Weber’s lead holds, she will join Colin Parent to give Democrats two seats on the Council – and she will become the first African-American woman to represent La Mesa.  A mother of two boys (photo), she is a physician at Rady Children’s Hospital and is also the daughter of Assemblywoman Shirley Weber.