Story and photos by Tom Gatch 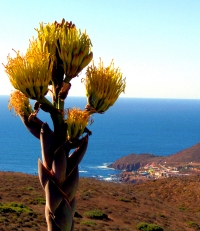 October 25, 2010 (Baja)--Punta Banda is a narrow, mostly barren, finger of land that pokes out into the Pacific Ocean at the southern end of Bahia Todos Santos near the City of Ensenada.  Standing not far from the tip, bus loads of bug-eyed tourists regularly stare out at the myriad of sharp, guano covered outcroppings as they munch on fish tacos and wait for the next influx of water to surge through the legendary blowhole, then spurt up in the air and dissolve into a fine, cool mist.

Shack-like concession stands line the end of the road leading to "La Bufadora."  Eager vendors offer visitors everything from the usual array of curios, plaster deities, and metal sculptures to humble preparations of shellfish, or fried seafood.  Some of the other residents are fishermen, or charter skiff operators who make a good portion of their income catering to the needs of American anglers and scuba divers that come to this special hideaway to take advantage of the abundant marine life that still exists in the waters surrounding the rugged peninsula and its many hidden coves. 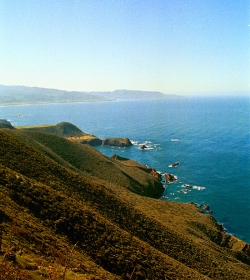 The hand of nature has carefully scooped a beautiful crescent shaped bay from the land just south of the blowhole, providing a nearly perfect anchorage that is protected from the northern wind and swells.  On a calm day, the waters around La Bufadora turn Mediterranean with cool, clear turquoise hues that anoint the eyes of the weary.  Weekend and retirement cottages are interspersed with the austere, tack-board houses of less affluent local residents.

The grandiose dream of a seaside hacienda stagnates as unfinished masonry sits on a neglected lot filled with scattered stones and chunks of hard, dried mortar.  Many of the homes are situated on a sloping bluff above the ocean, crowned by small windmills and black solar panels that help the frugal residents fully utilize the area's natural amenities.

The earth behind the little sea colony quickly rises several hundred feet to form a huge, dusty brown hill from which the marvels of many miles of wild coastline can be observed.  To the east, the hill provides an unobstructed view of the massive Sierra Juarez that stands as a barrier between Ensenada and the Sea of Cortez.

Years ago, the road out to the end of Punta Banda consisted of little more than graded stones, and was challenged mainly by those who were lured by visions of scallops, abalone, and huge fish.  Standing on the hill today, it is apparent that the well traveled, twisting line of neglected asphalt, which feeds La Bufadora’s tourist industry, has done little to affect the overall feel of the surrounding landscape.  Over time, a few colonies of neo-pioneers have settled in the area, but they have been unable to totally dominate the wildness that encircles them.  Copious numbers of quail, rabbits and rattlesnakes still blend into the rough chaparral, as the skies are patrolled by soaring Red tail hawks in search of a quick meal.

The two-legged mammals that live on Punta Banda are generally sturdy, fiercely independent nonconformists who are refugees from the eternal battle between those who like to be told what to do, and those who don't.

There are many course gravel roads that wind their way through the dry brush, over mounds of dust, and then disappear into unseen depressions; paths that often lead to a dead end when they meet with a thick wall of sagebrush and cactus.  The bold, thrusting lances of flowering yucca plants stand in stark, solitary challenge to the brilliant blue canopy above them.  When the sun hangs at a certain point in the westerly afternoon sky, the surface of the ocean seems to erupt into a sparkling carpet of diamonds, which fills the fortunate onlooker with a feeling of untold wealth.

In spring and early summer the hillsides are often smeared with a mustard yellow hue from scores of small wildflowers that bloom as brightly in the sunshine as if they were freshly wiped from the brush of Van Gogh.  The broad, stretching arms of a variety of succulent cacti bake in the midday heat, their moist, fleshy insides protected by many thorny soldiers that are ready to offer acute pain to any intruder foolish enough to encroach upon their domain.  It is hard to believe that the stressful overcrowding and traffic gridlock of Los Angeles, California lies just over a hundred miles to the north of this magical hideaway …but that is an eternity away from here. 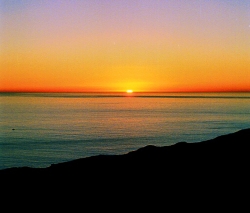 Up on the hill, the breeze blows freely through your hair.  The pelicans dive into the ocean for their breakfast, and all the creatures of the sea and land are filled with a wild lusting for life.  It is a life that is sometimes violent and cruel, but devoid of the many entanglements related to modern, human society.

It is a more primitive but, somehow, more credible world.

Over the past decade, ‘Hooked on Baja’ Author/Columnist, Tom Gatch, has built a solid reputation as one of the foremost writers and photographers focusing on outdoor and recreational topics in southern California and the Baja California peninsula. Tom’s widely read “South of the Border” column and articles appear in each edition of The Log, SoCal’s #1 Boating & Fishing Newspaper” and his popular ‘Hooked on Baja’ column is published in the Baja Times, Baja Norte’s oldest English language newspaper.

Tom is also a seasoned restaurant reviewer, whose mouthwatering descriptions of popular regional restaurants have provocatively stimulated the appetite of many a reader. His company, EL PUERTO Creative Consultants S.A. de C.V. provides professional copywriting and creative support for entities in both the United States and Baja California.

Both he, and his wife, photographer Lynn Gatch, are full time Baja California residents, and live just south of the city of Ensenada.  A graduate of Mount Miguel High School in San Diego's East County, Tom grew up in what was then the rural and bucolic community of Lemon Grove.

In further regard to this story by Tom Gatch, whom I had earlier written a review of his book Hooked on Baja, I am currently negotiating with the Rosarito Beach Hotel for them to sponsor this "Weekend Getaway" section, whereby we will better able promote tourism in Baja California. we hope to provide more information about the hotel and their fabulous restaurant, Restaurant Azteca.