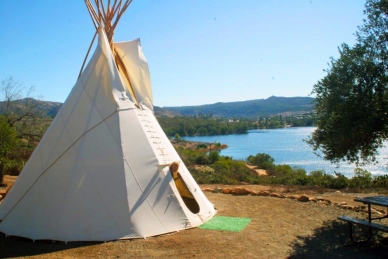 They’re spacious – each measures 20 feet in diameter, made of canvas from Colorado and pine wood poles from Montana.  Tipi (also spelled tee-pee) is a Lakota Sioux Indian word meaning “living in.” The Native Americans used buffalo hides to make their tipis, which were toted on horseback from site to site across the Great Plains. 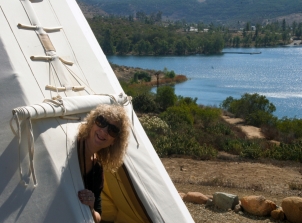 Now you can rent a night in a tipi at Lake Jennings for $65 on weeknights or $75 on weekends.   Also new are kayak rentals; it takes about an hour to paddle around this beautiful lake with mountain views or just float for a while and let stress melt away. 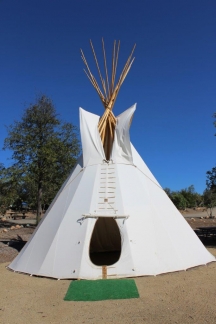 The lake also offers fishing and boating, miles of hiking trails, kids’ playground, tent camping, RV camping and a group camping site.  A morning on the water, afternoon on the trail and evening by a campfire is an idyllic way to relax and feel the rejuvenating power of nature.

Though you can easily envision yourself living in the past as you relax and unwind in a tipi by the shores of Lake Jennings, the lake does have some modern-day conveniences including free Wi-Fi throughout the campground and an outdoor lounge.

The tipis, kayaks and other new additions here are all part of a successful effort to save the campground from closing. Three years ago, when Helix Water District took back ownership of the lake from the County of San Diego, the campground d was losing money.  Some directors wanted to shut it down, but director Joel Scalzitti convinced the board to let him form a committee to find ways to save the campground. 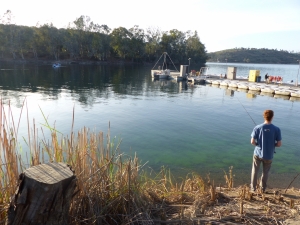 “One of the things we’re really proud about is we’ve turned this campground around,” Scalzitti said at a November10th “tipi reveal” event at the site.  “It took almost three years.” In year one, the loss was cut in half and in the past year, the campground is finally “in the green,” Scalzitti revealed.

The lake is actually a reservoir, storing treated Colorado River Water for use across East County, as well as a hidden gem for outdoor enthusiasts to discover.  It’s located just a few minutes’ drive east of El Cajon and around 20 minutes from San Diego. It’s easily accessible off Interstate 8, though it feels like world’s away.

Scalzitti credits Kira Haley, Lake Recreation Manager, for coming up with great ideas to save the lake—including making changes to the fishing program now getting positive reviews at http://sdfish.com. 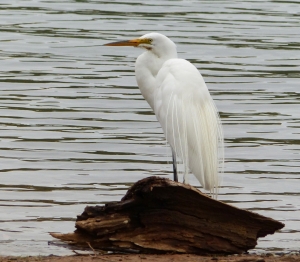 “This is a great, great place,” says Haley, who adds that she enjoys taking a morning float with a cup of coffee in the kayaks on the usually calm lake waters.  She adds that the tipis are already proving to be revenue generators in their first weeks of operation.  “All you have to do is show up and throw your sleeping bag in there,” she notes.  “These are really special.”

The tipi reveal drew applause from the crowd, but they have drawn one criticism.  Rudy Reyes, an archaeology instructor, posted on Facebook that tipis are “not indigenous” to San Diego County, where the Kumeyaay Native Americans originally lived in dwellings made of willows. He says it was “culturally offensive” for Helix Water to not consult local tribes before adding the tipis. But there’s a simple solution:  he hopes to see an educational exhibit added at the lake to teach visitors about local Kumeyaay history, which dates back 12,000 years, as well as facts about tipis.

For more information or to make reservations, visit  http://www.lakejennings.org/.