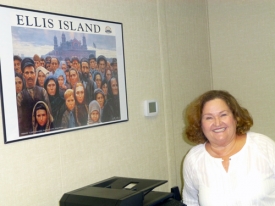 August 8, 2013 (El Cajon) – Foreign-trained doctors, nurses and medical technicians may help fill the gap between the number of health care professionals working in the United States today and the larger number expected to be needed when the federal Affordable Care Act goes into effect on January 1, 2014.

Welcome Back Centers at Grossmont College and eight other locations around the United States help to coordinate local efforts to prepare the foreign medical professionals for their American licensing examinations.

As project manager of Grossmont College’s Welcome Back Center, Gail Patterson, PhD., counsels the health care professionals about what they will have to do in the United States to resume the careers that they had to give up when they immigrated here.

Improved English skills also helps the medical professionals do better on the written examinations they must take to qualify for licenses here, Patterson noted in an interview.

The Welcome Back Center is a division of the Health Workforce Initiative (HWI) program of the California Community Colleges.  Ann Durham, based at Grossmont College, directs the HWI program in behalf of nine community colleges serving San Diego and Imperial Counties.

For doctors, the road back to their chosen profession is bumpier, Patterson said.   There is no formal training program to prepare them for the three steps of the United States Medical Licensing Exams (USMLE) that they must pass in order to qualify to become a resident in an American hospital.  So the doctors study on their own, sometimes eight hours a day, every day, in order to prepare themselves.   Others, however, cannot devote that kind of time to study because they need to earn money in the meantime to support their families.

Although they are medically trained, foreign doctors find many doors closed to them, commented Dr. Mozhdeh Shamshiri, who was a doctor in the intensive care unit at the university-affiliated hospital in Shiraz, Iran, for ten years before immigrating to the United States in 2009.

She was unaware of the Welcome Back Center for several years after she came to the United States, but now, having learned about it, is studying for the Step One examination that will assess her knowledge of anatomy, microbiology, and other sciences that form the basis of a career as a doctor.  Dr. Shamshiri has been in touch by email with 14 other similarly situated foreign doctors, with whom she shares study information.

Shamshiri said she has contacted several local hospitals in an effort to gain permission for herself and other foreign doctors to shadow American doctors as they make their rounds, but so far has been unsuccessful.  Although some American doctors are willing, she said, there apparently are regulations that preclude this avenue of study for the foreign doctors.

Notwithstanding the anticipated need for more and more doctors in a relatively few months as “Obamacare” goes into effect, Shamshiri said many foreign doctors become discouraged by the length of the process and because of the necessity, in the meanwhile, to earn a living, often in fields totally unrelated to medicine.

Iraqi-born Dr. Inas Abdulridha immigrated first to Morocco, and then to Libya, where she received her medical degree.  When civil war broke out in Libya, she left to Tunisia, where she worked for one year as a doctor in a regional hospital for the Red Crescent.  Then, she got a resettlement in the United States, arriving in San Diego not quite five months ago.

Dr. Abdulridha is one of the doctors who currently receive email updates and materials from Patterson and Dr. Shamshiri about the first phase of study for the medical license.  Unlike some other doctors, she has been able to remain involved in the medical field by serving as an on-call interpreter for Arabic-speaking patients at a clinic operated by UCSD in Mission Gorge.

“By chance I was interpreting for my mother there, and a doctor saw me, and he liked the way I was able to answer the questions for my mother, and said that there is a vacancy for an interpreter,” said Dr. Abdulridha.  “This is why I found the opportunity.”

There is an incentive for the American medical system to have bilingual doctors like Abdulridha who can speak the same native language as the patient and who also can be sensitive to cultural differences, Patterson noted.

Patterson said Step 2 of USMLE is a test of the foreign doctor’s clinical skills and knowledge.  Using actors (who often are students), the licensing agency will simulate situations to determine the foreign doctors’ diagnostic ability.

For example, said Patterson, “in one simulation there was a big guy who had muscle problems but was very combative.   In another, there was a shy immigrant woman who needed to be examined.  So the simulations helped determine both their clinical skills and knowledge.”

USMLE Step 3 is also very challenging. It puts a doctor in front of three television monitors, each showing a different venue where they might encounter a patient.  The situations on the screens develop quite quickly, and the doctor must decide what is happening and determine a prompt course of action.  On one of the screens, for example, a new patient on an office visit might be breathing shallowly and be having chest pains.  “There are multiple scenarios, and the doctor must be able to quickly know the best courses of action to take.”

Patterson recommends that doctors apply for their residencies before taking the USMLE Step 3. That is because once they have been accepted for residencies, the hospitals will want to protect their investments by providing time and study materials to help them pass the exam.  Studying on their own, on the other hand, can be quite expensive for the foreign-trained doctors.

Patterson said she tries to prepare foreign-trained doctors for this fact of life by suggesting that they consider other careers in the medical field, for example as physician’s assistants, who under the law can perform many of the functions that once were reserved to doctors.

The third category of medical professionals helped by the Welcome Back Center is technicians of various sorts.  Patterson said she gives people in these fields career counseling, information on schools and education, and information on job placement agencies.

On the wall of Patterson’s office is a poster showing people arriving at Ellis Island, which once was the major New York City depot for immigrants from Europe.  She said that her grandparents on one side of her family were from Scotland, who initially immigrated to Canada, and later the United States.  On the other side of her family, she said, were Russian Jews, who actually did go through Ellis Island.

She said the brother of her grandfather kept a journal about his experiences coming to America, and at one point wrote that he hadn’t uprooted himself from Russia for himself but rather for the sake of his “children’s children” – in other words, for Patterson, herself.

If grandfather Beryl and his brother Mitchell hadn’t made the journey, Patterson would not have been born in the United States, and would not have had the opportunity to receive an American PhD and to get the kind of job she loves, Patterson said.

Helping new immigrants to this country, she added, is a way for her to repay all the kindnesses that America extended to her own forebearers.