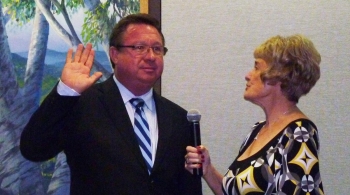 November 13, 2013 (El Cajon )--El Cajon’s City Council voted unanimously yesetrday to appoint Councilman Bill Wells to fill the vacancy left by Mayor Mark Lewis’s resignation.  Council also voted to have an application and list of qualifications drawn up within a week for residents interested in seeking appointment to fill the vacancy on the City Council  left by Wells’ ascension to mayor.

A crowd filled the Council Chambers, with many community members came to voice their views on how the city should fill its leadership positions.

Wells  opened the meeting as Mayor Pro Tem, calling the past few weeks “difficult” for the city.  He asked that controversial remarks made by then-Mayor Mark Lewis not be extrapolated to the entire Council.  “Now that the storm has passed, we need to take time to heal,” Wells said.

A heckler in the audience fired back, “Nothing has changed,” foreshadowing a spirited discussion on whether or not Council should make reflecting the city’s diverse population a priority in choosing its next mayor and/or councilmember.

Councilman Gary Kendrick called for forgiveness to make El Cajon “the best possible place to live” for everyone, adding that“unforgiveness is a poison.”

Several members of the public  used the public comment period at the start of the meeting to voice dismay at Mayor Lewis’s resignation following remarks deemed racially insensitive.  “I’ve known the mayor for twelve years and I don’t believe there is a racist bone in this man’s body,” said Sam Abbad,  who said Lewis has helped him with his businesses through the years.

Farouk Georges called remarks made against Lewis “vicious” and said attacks on the mayor were “shameful and improper.”    He and another speaker suggested that the push to force Lewis from office was motivated by merchants angered over the city’s new restrictive alcohol ordinance but 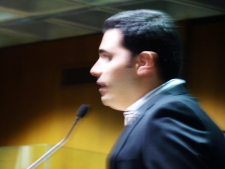 said such views do not reflect the Chaldean community overall. “We entirely support the ordinance,” said Georges, adding he believes it makes the community safer.

But Mark Arabo, head of the Neighborhood Markets Association, insisted that Lewis’s remarks were “disgraceful” and asked Council to hold district elections.  “We need representation for everybody,” he said.  As for the process for the mayoral selection, he claimed, “The whole world is watching. This is a crossroads for El Cajon.” 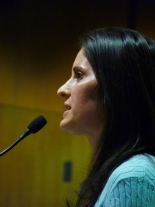 Lily Schworm, who  previously ran for Council on a platform that included eliminating all social services and the Recreation Department, asked to be considered to fill a vacancy on the Planning Commission should one open due to a  Commission member being appointed to fill a Council vacancy.  She brought her two young children with her to the podium , touting her church membership and support for protecting a “family environment” in El Cajon.

After a brief hearing to extend a moratorium on new thrift stores, pawn shops and other second hand dealers as well as a unanimous vote to ban fireworks (excluding licensed events such as the city’s annual July 4th display), Council held a public hearing on the Mayoral vacancy. 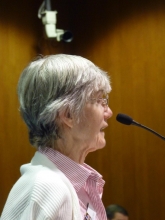 Bonnie Price asked Council members to approve a special election to fill the mayoral vacancy. She said an appointment would discourage people from having faith in their city government.  She asked that if the council opted to fill the vacancy by appointment,  Ben Kalasho, a Chaldean who narrowly missed winning election in the last race, should be chosen.

Developer Neal Arthur urged Council to make an appointment, stating, “I’m not worried about the public not being included, because you gentlemen were elected by the public.”

Frank Tsimboukakis, president of the East County Democratic Club, said the opening is a “chance to bring diversity to the council.

Jonathan Goetz, a Democratic activist, asked if councilmembers had discussed appointing Wells or Bales outside of a public hearing and suggested that if so, this would constitute a Brown Act violation. Wells heatedly denied that allegation, adding, “Even though you have a microphone, it does not protect you from the rules of libel and slander.”

The moment was reminiscent of La Mesa Mayor Art Madrid’s prickly response several years ago to Chris Tanner, a resident who suggested the Mayor and Council had turned a blind eye to zoning ordinances to favor a developer. Madrid threatened a defamation lawsuit against Tanner, drawing widespread criticism from residents who viewed the threat as an attack on a citizen’s free speech.  (Council later apologized to Tanner, but Madrid refused, later winning reelection by a slim margin.)

Wells has been credited, however, with improving El Cajon's finances by proposing to partner with car dealerships on promotional events, a move that has increased sales tax revenues.

Bill Baber, a member of the La Mesa Spring Valley School District board, spoke in favor of appointment, noting that’s how he first got his seat before winning the next election.

But others argued that appointment gives an unfair advantage of incumbency when the next election occurs. Todd Moore, a  conservative who ran unsuccessfully for Mayor, opposed an appointment and said it’s time for “new thoughts” on the Council. 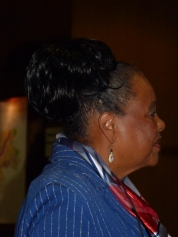 Vickie Butcher, an African-American woman who served three terms on the city’s Planning Commission and has previously run for Council and Congress, first called for a special election, stating, “We do not contest your leadership. We do request diversity.”  She also voiced support for district elections.

Later, after Council voted to appoint Wells as Mayor, Butcher returned to the podium and asked to be considered for appointment to fill the Council seat.  “I would represent a voice of diversity, being both a woman and an African-American.” After the meeting, Butcher told ECM she has concerns over Council opting to draw up a list of qualifications, noting that could be used to exclude certain applicants or limit criteria to only insiders favored by the Council.

Another name being mentioned as a potential successor to Wells on the Council is Star Bales, a Chaldean woman currently serving on the City’s Planning Commission.  Backers of Kalasho also asked that he be considered for the slot, citing his strong showing at the polls last election.

A local businsessman noted that some businesses have left El Cajon. He called for leadership and diversity, noting, “Every one of you are conservative Christians. We have people here who are not conservatives and are not Christians.”

Some speakers asked Council to hold a special election for the Council seat, which has nearly three years remaining in the term.  But Council members voiced support to fill the vacancy by appointment since the council has important matters to consider and currently there is a potential for a two-two deadlock.

“We will just be pandering to public sentiment to not appoint a mayor,” said Councilman Bill McClellan, who said an appointment is the most “prudent” economic decision.  Councilmembers Tony Ambrose and Kendrick agreed.

Wells then recused himself from the vote and left the room, returning after the 3-0 vote to be sworn in as Mayor and resume chairing the meeting.

During testimony over how to fill the Council vacancy, Price again asked Council to hold a special election in June as the “best way to render democracy active n El Cajon.”  She pointed out that El Cajon has the highest poverty rate in San Diego County, with 30% of the population living at or below the poverty level. “That may be one reason there are so many thrift stores.  People cannot afford to buy new,” she observed.  “These people need to be organized and represented.”

Duane Swainston, who ran for Council on a conservative platform in the past, said he backed an appointment as long as the process is transparent.

Council then discussed how to seat the next Council member.

Kendrick voiced support for appointment to fill the vacancy promptly, noting that “a lot of big things are going on” in El Cajon.  Major upcoming projects including a proposed hotel downtown and efforts to reopen the East County Performing Arts Center.

McClellan said he’d be willing to make the appointment “tonight” without applications from the public.

But Kendrick countered, “It’s very important that we do it with applications.” He likened it to a business conducting a search for qualified applicants, adding, “There is a lot of talent…we should want a wide variety of applicants.”  Ambrose agreed.

Wells noted Butcher’s comments on experience and said, “We should have weight on the scale for those who have already served.”  That weight could also favor Bales or other members of the Planning Commission, the traditional proving ground for individuals appointed to fill Council vacancies in El Cajon.

Wells made a motion to have Councilman Ambrose work with the City Manager to develp an application process and said he hopes Council can reach a decision at the December meeting. It passed 4-0.

An application for the council vacancy will be posted on the city’s website and available at City Hall by Monday, November 18 with a December 4 deadline to apply. Council hopes to fill the vacancy at its December 10 meeting, however if council members are unable to agree on who should be chosen by January 12, then  a special election must be held.

Based on the article,the events that transpired at the meeting, Lillys INOPPORTUNE timing of comment regarding a planning commission appointment, the presence of certain people at the meet, FOR THE FIRST TIME IN A LONG TIME, as family, and some small comments on veterans,or veteran kids of councilmembers,  while leaving me BROWN, if not red, in the face screaming of the existence of the proverbial predetermination of WHO goes WHERE, leaves me NO doubt that the person has been PRE selected and has to do with fulfilling a bunch of desired qualifications such as: 1: Public service in the city of El Cajon, 2: Some form of military service to the country,  3: Conservative if not openly Republican, 5: Double dose of diversity (Ethnic and Woman) , 6: Present Planning commission service(Ms Lilly didn't realize the public service she committed), and 7: OBEDIENT.   Lucky 7, JACK POT.

Memo to the City Council,and Mr Wells,from GOD: Thou Shalt not LIE. Or something like that.

Cause I've lost track ever since Martin Luther(the German sexual pervert one) rewrote the book of Perpetual Forgiveness and Accommodation (to excuse his lifestyle)  that became the guiding light of the PSEUDO CHRISTIAN CHURCHES that sprinkle the East County Landscape.

I personally have hired the LA Accounting Firm of Someone,Anyone and Bull, and have entrusted them the envelop with the winning contestant. Let's if the Stars allign for the right contestant.