October 26, 2021 (La Mesa) -- East County is quickly becoming the new go-to place in San Diego for the best BBQ in town. One of the most delicious is West Coast Smoke and Tap House in La Mesa, where new owners defied all odds by taking over amid the pandemic and serving up the restaurant’s most successful year ever.

With a revamped mouth-watering menu, 28 tap beers, and expanded eating, the new owners of West Coast Smoke and Tap House in La Mesa celebrated their new beginning by joining the La Mesa Chamber of Commerce. The Chamber held a ribbon-cutting on Thursday, October 21. Co-owners Kristina Blake and Humberto Aguilar hosted nearly 30 guests and supporters at the event. 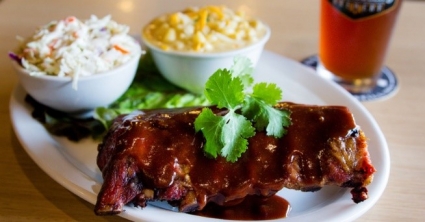 Asked what was new, Blake said, “We revamped the menu, took off a few items that weren’t working, put on a few new ones, focused on our smoked items, educated the staff because those are the people who really need to believe in it, and we brought a lot of new beers on tap that you can’t get anywhere else.”

“We make our own dressings, our own sauces, and we smoke our items with oak from Julian,” said Blake.

The connection to Julian is through a previous co-owner of West Coast Smoke and Tap, Tim Nickel, who owns Nickel Beer Company in Julian. Nickel is also co-owner of O’Brien’s Pub in Kearny Mesa, along with Tyson Blake, Kristina’s husband.

So, after a prior co-owner of West Coast Smoke and Tap, Larry Kruger, passed away, Nickel tapped Blake and Aguilar to take charge.

“We also have a lot of specials that we constantly change,” continued Blake. “You don’t think you’re going to go to a smoke house and get an awesome enchilada plate. But people come here to have just that.”

Blake went on to share a surprising story. “One thing that we really love about West Coast is the community that supports us. When I took over in 2019, we made some changes and saw a little bit of growth,” she recalls. “Then, what you would assume would be our worst year ever, 2020, the middle of the pandemic, we had the most incredible year in West Coast history! Because our customers were loyal.”

One of the reasons the community continued to support West Coast Smoke and Tap House is because “during Thanksgiving, we provided full house-smoked turkeys with all the sides. We also did house-smoked prime rib, and we did ham for Easter,” said Blake. 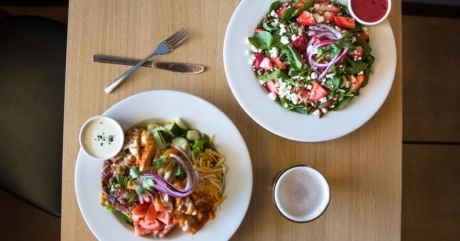 The menu at West Coast Smoke and Tap includes something from everyone, from their signature barbecue dishes such as ribs and smoked brisket to nine different burgers (including Beyond Burgers), daily specials, a kid’s menu, and 10 different types of salads.

“We have people calling every day to find out what our soup of the day is. It can range from a pozole, to a menudo, to a corn chowder, to tomato bisque, a miso, rice and chicken soup, and vegetable soup,” said Blake. “I love the mushroom soup.”  There are also daily specials such as Monday’s popular wings with house-made sauces.

Humberto, the chef, is dedicated to making customers happy. “If you come in and don’t see something on the menu, you can ask Humberto what is available, and he will make it for you,” shared Blake. “He makes it happen!”

We ordered the brisket plate to share, which comes with two sides. We had the onion rings and a salad. The brisket portion was large enough for both of us to fill up and was perfectly seasoned, juicy, tender, and wonderfully flavorful. The onion rings are just the way I like them, large and crispy. Plus, the salad was surprisingly large – not your typical side salad. Together with drinks off a menu featuring craft beers and wines, the meal was perfect for both of us.

Blake shared some of the many exciting events that are coming up at West Coast Smoke and Tap House. “We have Halloween coming up. So, kids 12 and under who come in costume can eat free with a paid adult,” said Blake.

“We also have San Diego beer week coming up, which is a huge San Diego event,” continued Blake. That will be Nov 5-14. 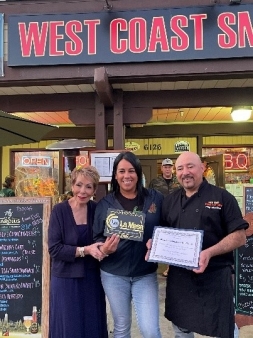 “We’re also taking over the Lake Cuyamaca Restaurant,” said Blake. “It’s going to be called The Pub at Lake Cuyamaca. We’re going to elevate the beer and wine selections, as well as the camping options. “Follow us on social media for all our specials and upcoming events,” shared Blake. “We have fun!”

West Coast Smoke and Tap House is conveniently located at 6126 Lake Murray Blvd, near the intersection with Dallas Street.

More information can be found on their website at https://westcoastbbqandbrew.com/.