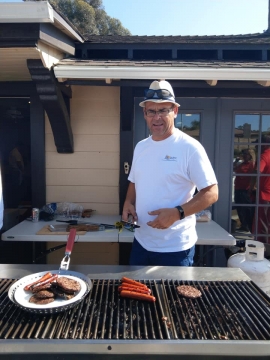 August 18, 2018 (Alpine) -- Alpine has moved from emergency relief to recovery since the July 6 West Fire destroyed and damaged dozens of homes and other buildings.

That’s the assessment of authorities still working to help about 55 families displaced after flames blazed through the eastern edges of the foothills community of about 16,000 people.

“We almost have debris removal taken care of,” Director Robin Clegg of the county-wide Community Recovery Team said in mid-August. “We might be done as early as Aug. 18. Uninsured people will need financial assistance.  We’re assessing needs.  Then we’ll act accordingly, based on what’s available.”

In addition to many smaller fund raisers, the big Alpine West Fire Benefit Dinner & Auction on Saturday, August 18 is raising thousands of dollars for survivors. 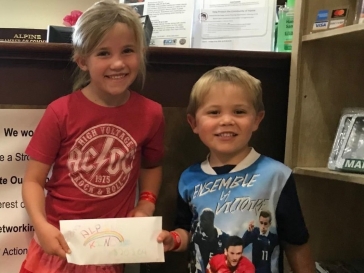 Meteorologist and lifestyle reporter Shawn Styles of Channel 8 TV’s KFMB news is the benefit’s volunteer master of ceremonies and auctioneer.  Channel 8 will broadcast live during the event, which starts at 5:30 p.m. at the Alpine Community Center, 1830 Alpine Blvd.

As of Aug. 13, the San Diego County Planning and Development Services listed 38 homes destroyed by the West Fire and 15 damaged.

“We find the (loss and damage) figures do change as the result of additional insurance information and more information from property owners,” Nicoletti said.

Clegg said there’s “kind of like a bigger picture now for survivors.”

“Some renters have tight budgets and may need a deposit and first month’s rent at a new location,” she said. “We’ll try to fill the unmet needs after we verify them.” 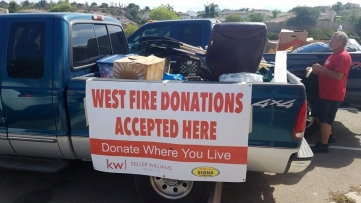 The Fire Victim Supply Post will be open at least another two months, accepting any useful donations in good condition, she said.

That includes small appliances, such as microwaves and coffee pots, and water, Gatorade and nonperishable food.

Rachell Lara of the Community Organizers group said they’re creating an operations structure in the event of another wildfire. They’re also working on a purely social event soon for West Fire srvivors.

“It’s a non-fire-related event for them to relax,” Lara said.

She said the Community Recovery Team recommended that for survivors. The Community Organizers have other helpful ideas and will be working with partners, said Lara.

Alpine residents Andrea and her two young children wanted to donate money made from a children’s weekend bake sale to survivors of the July 6 West Fire in East Alpine.

Andrea said daughter Shelby, 6, and son R.J., 4 1/2, with about six other children and mommies held the three-hour bake sale on July 14 outside Chic Boutique, 2175 Arnold Way.

“We had such a good response from the community,” Andrea said.

Standing as tall as he could, R.J. carefully handed over a white envelope with the rainbow-colored “Alpine Kind” written on it.  Inside were the proceeds from sales of delicious chocolate-covered pretzels, cookies and brownies.

The total donation for distribution through the nonprofit Alpine Community Foundation was $205 in bills and four pennies. 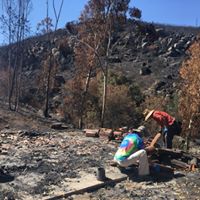 “It was a positive distraction for us because my husband just deployed eight days ago,” Andrea said about the helpful effort. “It’s good for us and we all love Alpine!”

Four hours of barbecuing hot dogs and hamburgers outside San Diego Estates in Alpine brought in $2,800 for West Fire survivors!

Realtor Jeff Campbell, owner of the business at 1935 Alpine Blvd., only planned to hold one two-hour free barbecue to raise money from donations.

However, his first barbecue fund raiser went so well that Campbell held a second one a week later. Friends and others helped him with the late afternoon events.

“We’re just one of many caring businesses and citizens who want to do something to help,” Campbell said.

Campbell said all the cash and gift cards donated will be handled through the nonprofit Alpine Community Foundation.

About a dozen people traveled with the caravan to the school at 2320 Tavern Road to help unload the many items fire survivors might need.

Keller Williams’s staff at the office at 1911 Alpine Blvd. began collecting essential donations immediately after the destructive blaze destroyed dozens of homes and other buildings.

“It went well,” Realtor Mike Garrison of Keller Williams said about collecting donations.  “It was overwhelming! Our office was filled to the brim and the overflow went outside. It was pretty cool.”

He said Keller Williams will continue to accept gift cards and financial donations for survivors.

“We’re going to adopt a family,” Garrison said. “I cannot say how amazed I am at what the community did.   People would come to the office and say, ‘What do you need?  I want to help.’”

When the phone rang on July 16 at the Alpine Mountain Empire Chamber of Commerce office, Treasurer Randy Catron of the Carlton Hills Lutheran Church in Santee was on the line.

Catron wanted to know where to send financial donations to help West Fire survivors.  He was told that checks made out to the nonprofit Alpine Community Foundation can be sent to the Chamber at 1620 Alpine Blvd., Alpine, CA 91901.

The church official explained that on Sunday the congregation had donated money specifically to help the Alpine fire survivors.

“We like to help out where we can,” Catron said.