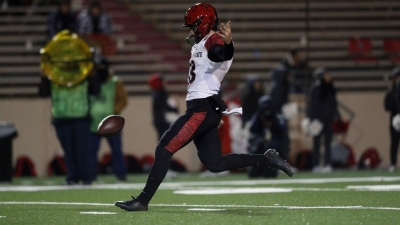 November 21, 2022 (San Diego) - West Hills High alum and San Diego State senior Jack Browning has been named the Mountain West Special Teams Player of the Week, the league announced Monday. It is the second MW weekly award of the season for Browning, who handles all three kicking duties for the Aztecs (7-4, 5-2 MW).

Browning helped SDSU to a 34-10 win at New Mexico on Friday night. Browning made both of his field goals (30 and 46 yards) and all four PATs, accounting for 10 of San Diego State’s 34 points. He also punted twice for a 52.5 average, including a career-long 63-yard boot. Browning kicked off seven times as well with four touchbacks for a 64.1 average, adding his second career tackle on a kickoff.