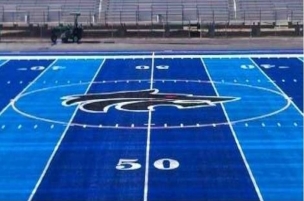 The old carpet was torn out over the weekend (Apr. 8-9), with workers now in the process of installing the new surface, Following a brief settling period, school administrators believe the field could be ready for graduation ceremonies in June should Viejas Arena at San Diego State University should not be available. 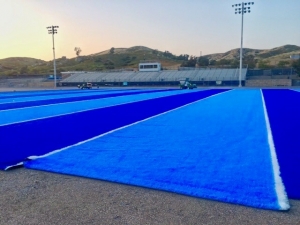 Meanwhile, useful parts of the old surface, like the area beyond the football end zones, will remain on campus as part of an updated look for the varsity baseball field.

Wolf Pack baseball head coach Mickey Deutschman, who also is the long-time owner/manager of the San Diego Stars semipro baseball field, is utilizing heavy equipment from his private ballpark on the Barona Indian Reservation to re-use the turf on the high school diamond.

The "Wolf Pack" logo is slated to be placed between home plate and the backstop, while foul territory between the infield and the dugouts will also to carpeted, along with the batting cages and bullpens. None of fair territory on the diamond will get carpet, remaining either grass or dirt.

The first, non-traditional green field was all-blue "Smurf turf" first installed at Boise State University. However, wanting to be unique,officials with the Broncos took the unusual step by gaining a copyright for the phrase "blue turf" in 2008.

Not to be outdone, Chaminade High in West Hills, Calif. (not our local school, but the one in the San Fernando Valley section of Los Angeles County), avoided legal action by calling its field's color "Florida Blue."