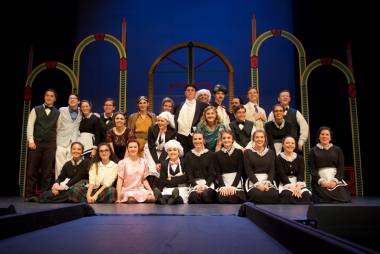 April 12, 2016 (Santee) - The West Hill Dramakids offered a fresh take on THE DROWSY CHAPERONE, with a woman in the chair, as the storyteller instead of a man. Thank you Carrin Edwards, director, for this innovative move. Rose Hawaree took on the role of (Wo) Man in the chair. She did an incredible job--so fun and enthusiastic to watch. The characters are engaging, funny, and quite entertaining.

As the (Wo) Man in the chair says - plays are meant to entertain and take us to another dimension. This musical more than does the job. As for plot in these type of shows, it's  basically scenes that kill time between production numbers, time used for costumes and scene changes. The main plot of "The Drowsy Chaperone ," is to keep the bride and groom from seeing each other on their wedding day. In the B plot, a producer is trying to prevent the wedding of his lead actress, (who plans to retire when she marries) from getting married.

The Drowsy Chaperone is really a secondary character; everyone is second to the (Wo) Man in the chair. One good thing about this play for students is the fact the show gives the opportunity for so many students to shine--to have their moments in the spotlight, with so many roles having solos. 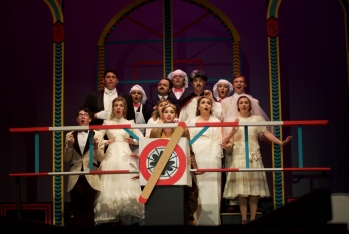 Which roles impressed me the most? Dylan Qualin, the producer,  reminded me of a young Joe Pesci. I also loved Ashley Carter as Kitty; she was great. Abigail Button. played Janet Van De Graaff, the bride,-actress,  nailed "The Showoff." Janet's voice was a real pleasure to hear. Dustin Russ, played the groom, a more quiet role, but he gave us the romance. Kevin Davison was terrific as the best man, the Urkel of the show. Shardin Johnson, played The Chaperone, with a spunky-give--it-her-all-attitude. Aldopho, played by Dyllan Cook, had his moments as the Latin Lothario the audience loves. Mrs. Tottendale, played by the  sweet Danielle Revilla, and Underling played by Ryan Fagan, have their moments, as sort of a vaudeville team. Analisa Reynoso, Joran Tucke, and Jeremy Thomas, play the lovable funny gangsters. Trix, played by Christina Keegan, is a wonderful singer. Of course, we also have the chorus to round out this fabulous musical within a comedy.

Kudos also go out to Ms. Edwards and her team for using their strong points to make the show work. Such as in the tap number "Cold Feets," where perhaps Russ wasn't as strong as tapper, so they showcased Davison and one of the maids, who brought the number. Russ did tap, and did a good job, but it not easy to find student tappers these days, especially guys. Edwards found a way to make this number shine like it should.All the production numbers rocked.

One note I have on this show, and it’s usually something they do so well, is blend together when they sang as a whole cast. Whether it was the music that didn't quite get there or voices that could not match the music, it did not work as a whole. I'm sure it's hard to master music and tone from an unfamiliar era. All of the other songs, especially the solos, were wonderful.  So harmonizing is something to work on - isn't that what students do?

The DramaKids at West Hills High School in Santee have two more shows and would love to have you fill up those seats.