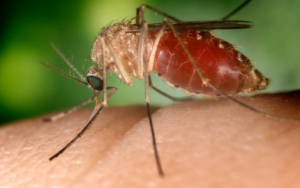 October 8, 2015 (San Diego) – Five new patients are confirmed to have been infected with West Nile virus, bringing the total number of people who have contracted the mosquito-driven disease this year to 11. These include  the second fatality this year localy---a 73-year-old El Cajon man who died October 4.

“These unfortunate deaths are a strong reminder that West Nile virus is a potentially deadly disease, and is active in our region,” said Wilma Wooten, M.D., M.P.H, County public health officer. “It’s important that the public continue taking precautions to avoid being bitten by mosquitoes, which transmit West Nile virus.”

The county had its highest number of confirmed human cases in 2008, when 37 cases were recorded.

County public health and environmental health officials continue to monitor the situation and take appropriate action to reduce the number of mosquitoes with West Nile virus. They urge people to protect themselves from mosquitoes and help prevent the pests from breeding by following the County’s “Prevent, Protect, Report” recommendations.

Prevent Mosquito Breeding: Dump out or remove any item inside or outside of homes that can hold water, such as plant saucers, rain gutters, buckets, garbage cans, toys, old tires, and wheelbarrows. Mosquito fish, available for free by contacting the Environmental Health Vector Control Program, may be used to control mosquito breeding in backyard water sources such as unused swimming pools, ponds, fountains and horse troughs.

Protect Yourself from Mosquito Bites: Protect yourself from West Nile virus by staying inside when most mosquitoes are most active, at dusk and dawn. Wear long sleeves and pants or use repellent when outdoors. Use insect repellent that contains DEET, picaridin, oil of lemon eucalyptus, or IR3535. Make sure screens on windows and doors are in good condition and secured to keep insects out.