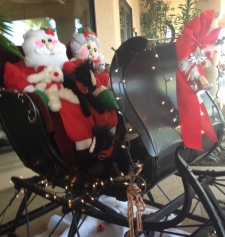 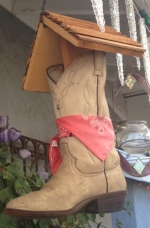 The first residence on the tour is owned by Lakeside Historical Society member Coleen Owens, who purchased 2.5 acres of bare land in 1987 with her late husband, Coy, to build their dream home, which was completed in 1989. Their driveway is named ‘Coyote Ridge’ because the coyotes are abundant in the El Cajon area. The residence has a contemporary design and is filled with antiques, collections, and western décor.  Coleen and her childhood friend/significant other John Digenan now reside in the home, which has Christmas decorations in virtually every room. 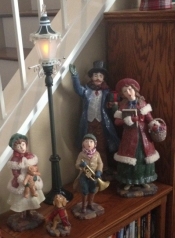 Next was the Yates estate, also in El Cajon.  Originally built by Bob and Gloria Yates in 1992, the home was lost completely to the Cedar fire in 2003. By 2007, it was rebuilt, larger and grander by their son-in-law, Jim Papenhausen. The residence has a Tuscan design with travertine tile and granite counters. Highlights includes 27 precast columns, custom precast fireplaces, an observatory and a home theater, All interior decorating including the Christmas displays throughout was done by Gloria Yates. Three generations of kids have fond memories of sitting on Santa’s lap in a sleigh parked on the driveway. Bob’s two large garages house his collections of antique and collector cars, and are surrounded by antique tractors.

“Bob and Gloria delight in entertaining and sharing their home with family and friends. During an average Christmas season, over 250 people enjoy their hospitality. They’ve also hosted 13 weddings, innumerable Christmas parties and other occasion." Bob told ECM that he and Gloria have five kids, 13 grandkids, and 14 great grandkids, several living nearby.. Nativity sets among other Christmas decorations and even wall art of antique cars in the observatory can be seen throughout the house. Their background has a splendid view.

The Gerhart home in Lakeside has figurines displayed downstairs, stuffed animals in a sleigh, and even snow globes upstairs among other Christmas decorations. Ken and Carolyn Gerhart bought this home in 1997 and raised their three children there.

Next was the Cooper Home in Lakeside, which had only the garden on display. Ken and Kitty Cooper have lived in their Lakeside home for two years after purchasing it from the previous owner Sandy Wilkas King, daughter of the original builders, Bert and Marie Wilkas. This home was built in 1957. The original builders believed in organic gardening, and have planted avocado, orange and tangerine trees back in 1958. They added a cactus garden and the now enormous fig tree about 10 years later. In front of the house is a 20-30 year old rose garden and a 10 year old lemon tree.

Current owner, Kitty, is a ‘Master Gardener.’ The hillside in back is.planted with water wise perennials and succulents. The front circle now has a bougainvillea, succulents and wildflowers from seed, along with the original shrubs. They added an automated watering system and some young stone fruit trees. Kitty is also part of the Lakeside Garden Club and she has her own blog about gardening with Open Sky Web Design. Read her blog at: http://blog.kittycooper.com/. 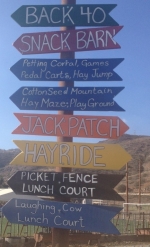 The tour ended at the Van Ommering Dairy Farm in Lakeside, a family owned dairy farm which has cows, donkeys, and llamas. The dairy is a third generation farm established in 1960 by Gerrit and Gerry Van Ommering, who came here from the Netherlands. The dairy produces raw milk, which is sold through a cooperative to processors for cheese, butter, and milk powder products… In the spring, there are tours for kids and picnic sites. In fall, Oma’s Pumpkin Patch opens and during the holiday season, Oma’s Christmas Tree Farm helps to support the family farm—along with a ‘Piece of Farm’ gift shop.

Dove Van Ommering gave a tour to the public on a hayride. He showed the cows, which are separated into those on ‘moo’-ternity leave, a calf raising area, and an area for the bulls. When someone wanted to know how many cows they have, Dove said, “We milk about 270 cows, but we have 800 mothers/babies.”

The dairy also plans to make artisan, farmstead cheese on the farm beginning next year.

To learn more about the dairy including the future artisan cheese, visit: http://www.omaspumpkinpatch.com/.