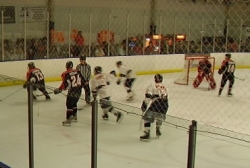 (ESCONDIDO) - Saturday night's hockey game at Iceoplex Escondido between the host San Diego Gulls and visiting Bakersfield Junior Condors was almost the exact opposite of Friday night's game between these two teams, a 13-3 rout by the Gulls. Such scores make fans who missed the game do double takes and wonder if there will be a hockey puck shortage--or if the final tally came from a football game instead.

This time the goals were not as easy to come by as it was the defense that shined for San Diego. They survived several flurries of shots from Bakersfield and overcame a double-minor penalty en route to a 4-0 win.

When Mike Spunt scored the first goal of the game for the Gulls after only two minutes and 20 seconds elapsed in the first period, it appeared that this game might be a repeat of Friday night's blowout. Curtis Martin added another goal a few minutes later on a power play to give the the Gulls a 2-0 lead. 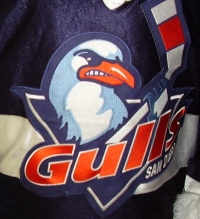 The game took an unusual turn with 1:55 left in the first period when Martin and Bakersfield's Brandon Bullett got into a fight. Both combatants received five minute penalties for fighting and the intermission began early to allow rink personnel to clean blood off the ice after Martin suffered a broken nose.

After the intermission, the two teams completed the remainder of the first period and played the entire second period before the next intermission. It effectively amounted to an extended second period lasting 21:55. During the extended time on the ice, neither of the two teams put the puck in the net. Although both teams had more than an adequate number of shots on goal (Bakersfield 14, San Diego 11 in the second period) neither team was able to score. 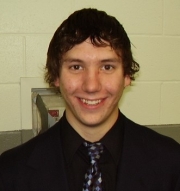 The Condors had an excellent opportunity to get on the board in the second when Gulls' defenseman Cassidy April went to the penalty box to serve a double minor penalty with 8:27 left in the period.

Bakersfield's Jeff Dill had rushed the net on a scoring attempt with April defending. Both players fell to the ice, dislodged the net from its moorings and got into minor scuffle. Although both players were penalized, April was penalized more, and the net effect was a four minute double minor on him.

With the extended power play advantage, Bakersfield had plenty of opportunities to score against a Gulls defense that had to have been exhausted. San Diego goaltender Jason Campbell made impressive stops and benefitted from a hard working penalty killing unit that included Donnie Keffer (Santee), Spunt, Jonny Neal and Theo Campe. The group kept Bakersfield from scoring in spite of several quality scoring chances.

April, a 2009 graduate of Valhalla High School, praised his teammates' effort on the extended penalty kill: "Our defense came together and kept it tight in front of Campbell and Campbell came up with some saves." 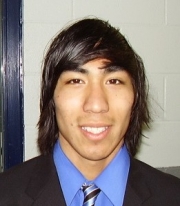 With only one other penalty in the second, a two-minute charging penalty by the Gulls' Charles Baldwin, the period was almost as uneventful in the penalty box as it had been on the scoreboard. This trend would not carry over into the third period.

After Brian Finn added a goal midway through the third period to put the Gulls up 3-0, the match could best be described as a fight where a game broke out. Three players from each team received penalties for fighting or roughing in the span of fourteen seconds of game time. Jeff Dill of the Condors and Eric Obinger of the Gulls were ejected after dropping the gloves. Feelings of ill will after Friday night's blowout win by the Gulls were a likely contributor to the outbreak of fisticuffs.

Nick Lum added a goal with 5:27 left to make the score 4-0, Gulls. He was surprised at what happened after shooting the puck: "The puck got back to the point to Curtis Martin, then he took a shot and the puck came back out. I saw the puck, so I skated towards it, just got a shot on net and then it went in. I didn't even know it went in," Lum said, "I just shot it, and then everyone started cheering."

In spite of Bakersfield's tireless effort to avoid a shutout and their last-minute barrage on the Gulls' net, Campbell and the defense stopped several shots to preserve the shutout and a Gulls' win.

"It was a good game, solid game, we all stepped up for each other--and fought," said April, who had two assists, about the Gulls' win.

Christopher Mohr is a freelance writer in the San Diego area and is an avid (and frustrated) fan of the Chargers, Padres and Detroit Red Wings.