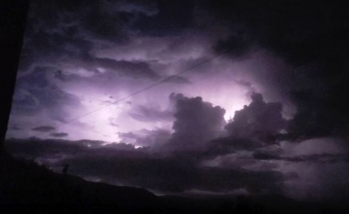 In Borrego Springs on September 1st, Bob  Kutscher snapped this photo of an active thunderstorm over Palm Desert.  “The rate of lightning was about 1 to 6 seconds between strikes, very active,” he writes.

Some areas in East County got over an inch of rain in less than 12 hours, including Pine Valley and Cameron Corners.  Stormy weather sparked power outages, contributed to car accidents and caused as several small brush fires that were quickly extinguished.

The weekend should bring drier conditions though temperatures as of Friday remain in the mid-80s in coastal areas, with temperatures into triple digits in the desert areas. Temperatures are expected to dip by several degrees over the weekend and early next week as we approach the final weeks of summer.