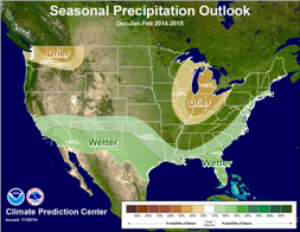 Any rain is good news for drought-stricken California, where the past three years have been the driest period on record with a shortfall of 21 inches below normal precipitation levels.  Warming sea surface temperatures in the equatorial Pacific are expected to create mile El Niño conditions by early winter, bringing an increased storm track to southern California. But it likely won’t be enough to end the drought.

A drought watch story with data compiled by Alex Tardy at the National Weather Service notes that historically, recent El Niño winters have resulted in precipitation at or below normal.  “California would need about 150 percent of average for the rainy season(October to April) in order to significantly reduce the drought” and raise water supplies that are 35 to 45 percent below capacity to near-normal levels, Tardy concludes.