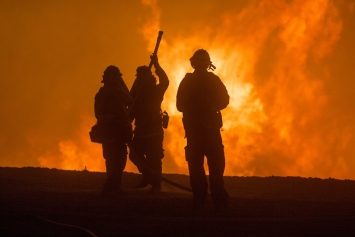 Cal Fire has blamed PG&E powerlines and other equipment for causing 17 fires in 2017.  The company’s equipment is also being investigated as a likely cause of the deadly Camp Fire that killed 86 people and burned nearly 14,000 homes in Butte County. The utility was also found criminally liable for the San Bruno gas pipeline explosion in 2010.

The utility provides power for over 15 million ratepayers and employees some 20,000 people.

PG&E has declared bankruptcy once before in 2001, blaming its financial woes back then on the energy crisis but emerged out of bankruptcy in 2004. Critics have blasted the utility for putting corporate profits above public safety and faulted the California Public Utilities Commission for turning a blind eye to some safety risks and for some commissioners and former CPUC president Michael Peevey having an overly cozy relationship including backroom dealings with the utility companies that it is supposed to regulate.

In 2006, after PG&E received punishments amounting to only a slap on the wrist despite felony convictions of criminal negligence and obstructing justice in the San Bruno disaster, Los Angeles Times columnist Michael Hilitzik predicted,  “Even with six criminal convictions on its record, PG&E is almost certain to continue in business as if nothing has changed. That's the consequence of trying to tie wrongdoing to a faceless corporation rather than to the human beings who make crucial decisions that lead to destruction and death.”

A San Diego Union-Tribune editorial today lays blame on state regulators, PG&E, and former Governor Jerry Brown for vetoing several regulatory reform bills aimed at holding utilities and the CPUC more accountable.  The newspaper’s editorial board concludes, “…it is far past time that the Legislature, with the support of new Gov. Gavin Newsom, make a similar decision about the CPUC. The enabler of PG&E’s perfidy must pay for its failed oversight.”

An article today in Bloomberg News speculates that PG&E’s bankruptcy may be “what California needs for a utility fix.”

California can now wield power as an entity that will likely have to sign off on any reorganization plan, says energy economist Severin Borenstein at the University of Cailfiornia, Berkeley, sparking more discussion on how utilities should be structured amid increased wildfire risk and multi-billion dollar liabilities.

Options could include breaking up the utility giant, as was done in the past with other monopolies, or converting the company into government-owned power entities.

Talks between PG&E, Newsom and state legislators failed to yield any bail-out for the troubled utility. Unlike some past companies that were recipients of massive government bailouts, PG&E’s financial troubles are largely due to its own actions including criminal conduct and negligence in maintaining electrical equipment —not market downturns or other circumstances outside of the company’s control.

Governor Newsom issue a statement indicating his office has been “closely monitoring the impact of PG&E’s existing and potential future liability for the deadly wildfires on the victims of the fires and the consumers who rely on PG&E for their electric and gas services.” He indicated that his team has been working with stakeholders including the CPUC, PG&E, CAISO and labor unions.

Newsom assured that the immediate focus is on assuring that Californians will have “continuous, reliable and safe electric and gas service” but added that “the company should continue to honor promises made to energy suppliers and to our community.” Newsom pledged to work with the Legislature and all stakeholders to find a solution that ‘ensures consumers will have access to “safe, affordable and reliable service, fire victims are treated fairly, and California can continue to make progress toward our climate goals.”

San Diegans receive power from San Diego Gas & Electric Company (SDG&E), not PG&E.  But the bankruptcy of PG&E raises the unsettling question:  could more utility companies wind up bankrupt from the high cost of wildfire liabilities?  Could future wildfire victims be shortchanged on options to be compensated for major losses if more utilities seek to escape liabilities by declaring bankruptcy and reorganizing?

The CPUC denied SDG&E’s multiple requests to charge ratepayers for the uninsured portion of its financial losses from the 2007 Witch, Rice and Guejita fires for which state investigators blamed SDG&E equipment. Though substantial, those loses were nowhere near as staggering as the sums for which PG&E may ultimately be held liable.

After state regulators denied SDG&E’s requests to bill ratepayers for its wildfire liabilities to those who suffered losses in those fires, SDG&E invested heavily in upgrading equipment, fire-hardening lines, stationing an Air Crane firefighting helicopter here and installing the largest utility-owned network of weather sensors on its towers across the backcountry locally. The company has also deployed controversial proactive power outages during high wind conditions.

If the CPUC had held PG&E responsible at the first signs of safety violations and maintenance failures, could the deadly 2017 and 2018 wildfires have been prevented? Now that the company has repeatedly demonstrated blatant disregard for protecting human lives and properties, should it be given a second chance—or should the state push to have PG&E’s responsibilities as a power provider taken away?  On the other hand, if the state were to step in and take over power production and/or distribution, will taxpayers be left footing the bills if future fires occur that might have been prevented?

These are some of the tough questions that the new Governor and Legislature will have to address in the coming months.