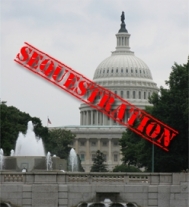 “By God, across-the board cuts are the worst and most cowardly way to approach this situation.” –Senator John McCain (R-AZ)

"Are Republicans in Congress really willing to let these cuts fall on our kids’ schools ...slash military health care and the Border Patrol ...Are they seriously prepared to inflict more pain on the middle class because they refuse to ask anything more of those at the very top?" -- President Barack Obama

February 25, 2013 (San Diego’s East County) – If Congress can’t agree by Friday, automatic sequestration cuts will take place in nearly all federal programs.  Half will hit the military, the other half will slice domestic programs.

Both sides agreed in prior debt negotiations that the cuts were so severe that neither party would actually let them take place--and that the sequestration trigger would force Congress to come up with a more sensible plan before the March 1 deadline.

Unfortunately, that hasn’t happened.  Sequestration appears likely to occur on Friday--and the impacts are apt to be felt by every American, from long waits at airports to cuts in programs impacting students, senior citizens, the military, national parks, the unemployed, health programs, and much more.  Defense Secretary Leon Panetta has said cuts will  even harm the readiness of U.S. troops in the military.

Economists and governors of numerous states warn that sequestration will likely halt economic recovery. Meanwhile  Congress remains deadlocked over a Democratic proposal to raise taxes on the wealthy, along with cutting some spending, to avoid sequestration. Some moderate Republicans are speaking out on the neeed for Compromise, though Tea Party Republicans want Democrats to halt any cuts to the military and oppose all efforts to raise taxes on the wealthy, instead pushing for even deeper cuts in domestic programs such as education and Medicare.

Last night, the White House released a detailed list of sequestration impacts on each state.  Scroll down for details and view the full list here:

California would face $5.4 million in cuts to funds providing meals for seniors, such as Meals on Wheels.

Our state would lose about $87.6 million in funds for education, which would put 1,210 teachers’ jobs at risk.   Another $62.9 million in special education funds would be lost and 9,600 low-income college students would lose funds.  Head Start programs for 8,200 children would be gone.

The Defense Department would furlough 64,000 civilian employees in California. In San Diego, maintenance/repair of five ships and aircraft depot maintenance in North Island could be cancelled. Army and Air Force base operations in California would also be slashed.

Law enforcement statewide would lose $1.6 million.  Job search help for the unemployed will be slahed, meaning 129,770 fewer people will get help.

Public health will feel the pinch, with deep cuts to programs in childhood vaccinations, HIV testing and substance abuse.  Programs that help domestic violence victims could lose up to $795,000, meaning 3,000 victims would not be helped in California alone.

Tens of millions would be cut from clean water and air quality funds and grants that protect fish and wildlife in California.

At the national level, the Office of Management and Budget calculations sequestration will also mean cuts to small business loan guarantees by $900 million. Up to 2,100 cuts in food safety inspections are predicted, as well as cuts to services helping mentally ill adults and children, research into disease cures and treatment at the National Institute of Health, and cuts to the National Science Foundation.

The U.S. Border Patrol would lose work house the equivalent of over 5,000 border patrol agents.  Cuts to Homeland Security would mean staffing cuts and wait times up to 50 percent longer at major airports, where FAA employees would also be furloughed.

Important for our wildfire-prone region, the Federal Emergency Response Agency would see big cuts, slowing its ability to respond to natural disasters.

Also, thousands of transitioning veterans returning to civilian life may be left without adequate help due to cuts in the Department of Labor’s Veterans Transition Assistance Program and the Jobs for Veterans State Grants Program. One bright spot: The Department of Veterans Affairs is exempt from sequestration.

Over 100,000 formerly homeless people, many of them veterans, would  lose housing and emergency shelters would also face cuts, likely putting many people back on the streets.

Troubling for many, 398 national parks could be partially or fully closed .

Social Security could see a reduction in service, rental help for low-income families, and nutrition assistance for women, infants and children will see cuts so deep that 600,000 women and their children would be dropped if sequestration offers.

Instead of forced sequestration cuts, Democrats want to  reduce the national debt by getting more tax revenue from millionaires, halting some agriculture subsidies and cutting military spending after the end of combat operations in Afghanistan in 2014.

A national  poll by Pulse Opinion Research, reported by the Hill, found the majority of Americans (58%) want to cut the debt – but most strongly disagree with the approach sequestration would take.

A whopping 69% oppose cuts to social programs; only 23% of the public would support slashing Social Security and Medicare.  Just 29% of Republicans and 12% of Democrats would back cuts to those areas.

Asked about defense spending, 37% of Americans polled said too much is spent on the military, while 18% said too little is spent.

The poll numbers reflect the depth of the challenge facing Congress:  66 percent of Americans think cutting the U.S. debt is important – but voters show far less support for cuts in either military or domestic spending.

“I am not going to back off the sequestration,” Reid said, adding that the threat of sequestration was intended to result in a compromise—something the GOP has refused to do. “To now see the Republicans scrambling to do away with the cuts to defense, I will not accept that,” Reid concluded, Politico reported. “My people — in the state of Nevada and I think the country — have had enough of whacking all the programs. We’ve cut them to a bare bone, and defense is going to have to bear their share of the burden.”

Within Congress, even some Republicans are now speaking out  to say that raising taxes may be the lesser of the evils, while others fault the President for not agreeing to Republican-backed cuts—and some Tea Party loyalists are even pushing for sequestration to occur as a means of radically reducing government spending across the board.  They are holdng firm that the debt must be resolved only with deep cuts and no revenue increases, not the mix of both spending cuts and revenue increases that Democrats and some moderate Republicans seek.

“The President needs to step up to the plate,” Louisiana’s Republican Governor Bobby Jindal said on NBC’s Meet the Press. “There is never enough taxes for this administration.”

But the President, in a speech this week, insisted the burden falls on Republicans to take action. "These cuts don't have to happen. Congress can turn them off at any time with just a little compromise...The American people have worked too hard for too long to see everything they've built undone by partisan recklessness in Washington."

“We don’t like increasing taxes,” Arizona Governor Jan Brewer (R) told CBS Face the Nation this week, but added, “We know there has to be some kind of compromise, but dang it, they need to get the job done.  They don’t need to leave the public out there hanging.”

What can you do?

To voice your views on sequestration cuts, contact your elected members of the House and Senate at the contacts listed below. If you're not sure who your Congressional representative is (some districts have changed with redistricting), the link at the bottom of this page allows you to type in your address and get the information.

Type in your zip code at this link to find out: www.house.gov/writerep

Or check this map at the San Diego Registrar of Voters:

Not true, to the commenter below. There are some cuts proposed. Here is a chart that shows both what has already been cut, and what is proposed by the President to be cut:

They are not CUTTING ANYTHING! They are cutting the INCREASES IN SPENDING. Better teach your Grand Children how to beg with a tin cup.