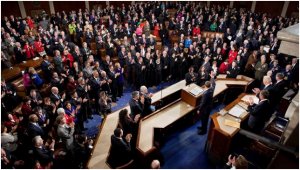 January 21, 2015 (Washington D.C.) --President Obama’s nearly hour-long State of the Union speech on Tuesday had good news for a number of constituencies in San Diego, from veterans to scientists to immigrants.

The speech drew praise from Democrats in the San Diego congressional delegation, but criticism from Republicans. Rep. Darrell Issa, a Republican, labeled it “old ideas” while Rep. Scott Peters, a Democrat, said he was encouraged by the president’s commitment to scientific research, tax changes and wider educational opportunity.

“I was encouraged to hear President Obama engaging on issues of importance to San Diego and the country, and calling for bipartisanship on economic growth,” said Peters, whose district covers most of central San Diego County.

Here’s a synopsis of the Obama’s comments on issues of specific importance to San Diego:

Active-Duty Military: With Sailors and Marines from San Diego fighting Islamic terrorists in Iraq and Syria, the President asked Congress to pass a resolution to explicitly authorize the use of force against ISIL.

Veterans: He vowed to help returning veterans find jobs, saying “to every CEO in America, let me repeat: If you want somebody who’s going to get the job done, hire a veteran.”

Space: The President singled out NASA astronaut Capt. Scott Kelly, who is about to spend a year on the International Space Station, while his twin Mark, also an astronaut, remains on Earth. The twin astronauts will be the focus of a UC San Diego study.

Medical Research: Obama mentioned successful treatment of cystic fibrosis pioneered by Vertex Pharmaceuticals, which has operations in San Diego, and pledged to support medical research. “Tonight, I’m launching a new precision initiative to bring us closer to curing diseases like cancer and diabetes  —  and to give all of us access to the personalized information we need to keep ourselves and our families healthier,” he said.

Community Colleges: He urged Congress to make community college free to ensure that all Americans have the education necessary for a modern economy. “By the end of this decade, two in three job openings will require some higher education,” he said. “And yet, we still live in a country where too many bright, striving Americans are priced out of the education they need.”

San Diego has the second largest community college district in California, and Peters noted, “The President’s focus on expanding access to college was also very welcome, not just to families struggling to save enough to send their kids to college, but also to thousands of San Diego companies who are reliant on an educated workforce.”

Immigration: Obama acknowledged political differences over immigration, but appealed to Congress to create a path to citizenship for the 11 million undocumented immigrants in America. “Yes, passions still fly on immigration,” Obama said, “but surely we can all see something of ourselves in the striving young student, and agree that no one benefits when a hardworking mom is taken from her child, and that it’s possible to shape a law that upholds our tradition as a nation of laws and a nation of immigrants.”

Issa, who represents coastal north San Diego and south Orange counties, said he was disappointed by the speech, which he described as “old ideas and half-baked policies” in a statement.

“The President’s speech was predictable and hardly inspiring,” Issa said. “Every year, the President demands more money from Congress. This time it’s $400 billion in new taxes, the first time it was a trillion dollars in ‘stimulus spending.’ When you look the series of broken promises: Americans getting lied to about keeping their healthcare, IRS political targeting and the other failures, it’s hard to justify giving this President more tax dollars.”

Democrat Rep. Susan Davis urged Congress to join the President in his efforts to support the middle class.

“Despite recent signs of economic improvement, too many families are not feeling the benefits,” she said in a statement. “The President brought forward specific proposals to strengthen the economic security of working families.  Congress should join him in that effort.”