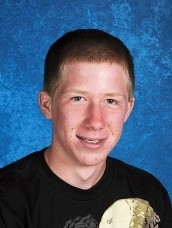 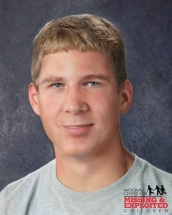 June 11, 2014 (Ocotillo Wells) -- Nearly five years ago, 16-year-old Mickey Guidry disappeared in the Anza-Borrego Desert.  The Jeep he’d taken from his family was found broken down and abandoned, its tire worn down to the rim near Fish Creek wash, 22 miles from the nearest highway  over Thanksgiving weekend.  He has not been seen since November 26, 2009.

Now the National Center for Missing and Exploited Children has released a photo showing what Mickey might look like today, at age 20, if he made it out of the rugged terrain alive.

There is good reason to believe he did, Sheriff’s Search and Rescue leader Sergeant Don Parker believes.

Intensive searches in the weeks after his disappearance failed to find any sign of foul play.  Cadaver dogs found no human remains.  A cover from the Jeep’s spare wheel well was found on a hilltop nearby, raising hopes that Mickey may have made it out alive – and possibly run away.  The weather was cold and rainy, so he may have taken the wheel cover to shield himself from the rain.

Grounded for taking a relative’s motorcycle without permission and crashing it, Mickey had been told by his parents that he could not go camping with friends that fateful weekend. So he took the family Jeep, even though he had no driver’s license yet, and headed out to Ocotillo Wells. There he met up with a girl he was friends with and her family.

The family told authorities that they gave Mickey gas money and told him to go home.  That was the last time Mickey was seen alive.

Mickey’s wallet and ID were left in the car. His cellphone has never been found, though Mickey may have taken it with him  if he set off on foot – not realizing it had been shut off by his parents as punishment for taking the Jeep.  He had no food, water, or flashlight as far as anybody knows, and left extra clothes behind in the Jeep.

Sergeant Parker has taken the search to heart.  During the many months of searching for Mickey, he fell in love with Mickey’s mother, Missy. They have since married.

“Every time we go out there and every time we don’t find him, it brings hope that he’s alive,” Sergeant Parker told the UT San Diego in a recent interview.  Searches have been conducted by air and on the ground, on foot and with vehicles, using teams of volunteer searchers. Flyers have been distributed widely.  A search of morgues and hospitals in multiple counties yielded no leads.

Other than the wheel cover, not a single clue to Mickey’s whereabouts has ever surfaced.

Missy has praised the National Center for Missing and Exploited Children for publishing the age-enhanced photo, though she thinks Mickey’s face may be slimmer than in the picture, since he tended to take after her in appearance.

Mickey is white with sandy hair and blue eyes. When he vanished, he had metal braces on his teeth and acne on his face.  He was 5 feet 10 inches tall and weighed 155 pounds.  He may have been wearing denim jeans, blue high-top canvas shoes (Iron Maiden Vans) and possibly a dark blue hoodie.

At the time of his disappearance, his mother told East County Magazine that Mickey might have wanted to return to the family’s former home in Arkansas.  He also mentioned to a friend that he might be headed to Los Angeles to see a brother, but Mickey doesn’t have siblings.

A friend  and Mickey’s mother both said he had no history of involvement with drugs or gangs. Other than taking the family vehicles without permission, he had not been in any major trouble.  At school in San Marcos, he enjoyed ROTC courses and Future Farmers of America. He also enjoyed working with small engines such as lawn mowers and cars.

Detective Patrick Yates, who handled the initial investigation, believed Mickey was most likely a runaway.  “Mickey was the last one to have control over his life,” he told ECM at the time.

But the abandoned vehicle, found in non-drivable condition in rugged terrain 22 miles off any major roadway, raised concerns over others that Mickey’s plans may have gone awry.

Did he meet with foul play, or succumb to the elements on that cold and rainy November night?  Or did he make it out of that rugged desert terrain – and if so, did he leave voluntarily, or might he have been abducted?

No one knows, but his family holds out hope that someone, somewhere, will recognize Mickey’s photo – or remember something that could lead to solving one of the most intriguing missing person cases in San Diego’s East County.

You can view Mickey Guidry’s photos, then and how he may appear now, on our website at EastCountyMagazine.org or on the National Missing and Exploited Children’s webstie at MissingChildren.com.

If you have any information that could help olve this case, please call the San Diego Sheriff’s San Marcos Station at (76)-510-5200.