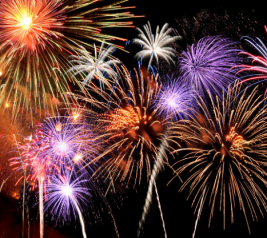 By Miriam Raftery
June 28, 2020 (San Diego’s East County) – Due to COVID-19, several of East County’s most popular 4th of July celebrations have been cancelled. But several others have revamped to provide fireworks displays with social distancing and/or virtual celebrations.
Where to find fireworks:
El Cajon will have its annual “Look to the Sky” fireworks display at John F. Kennedy Park (1675 East Madison) which will be visible across much of El Cajon starting at 9 p.m. However due to social distancing requirements the park will be closed and no public gatherings will be permitted at or near the park.
Santee will host a virtual at-home celebration online, followed by live fireworks in two simultaneous shows at  9 p.m. at Town Center Community Park East and West Hills Park. Fireworks locations will be closed to the public but you can watch from a distance or online. There will be an 80z All Star virtual concert and patriotic flag ceremony to rock your 4th of July before the fireworks, will be synced to a soundtrack simulcast on KSON 103.7 FM.  Santee also invites residents to submit a photo of your home, porch or yard decorated for the 4th of July by noon July 4 at SpecialEvents@CityofSanteeCA.gov. The winner will get a reserved shade canopy at the city’s next live Santee Salutes event, hopefully in 2021.
Poway will host two fireworks shows, one launched from Poway High School, the other from the city’s Sportsplex in the South Poway Business Park. See the fireworks map for areas around the high school and business park for parking. The city obtained donations from local businesses to make the second location possible, which has nearly a 360-degree opportunity for people to view the fireworks display. Spaces for viewing from Lake Poway are sold out, but the fireworks will be visible from across much of the city starting at 9 p.m. on July 4.  Poway Mayor Steve Vaus says the celebrations “will bring people together in spirit and shine a little bit of light into the darkness we’ve experienced due to the pandemic, all while we celebrate our nation’s founding.”
Countywide, most major fireworks shows have been cancelled or celebrations switched to virtual, though a few remain pending. Patch.com has a list of all 4th of July events countywide and is posting updates at https://patch.com/california/san-diego/san-diego-county-4th-july-fireworks-your-2020-guide-events.
Cancelled events
Julian’s 4th of July Parade and Jubilee for the town’s Sesquicentennial, or 150th anniversary has been scratched due to the County not issuing any parade permits amid the pandemic.
The Julian Parade Committee states, “With a heavy heart we have decided to cancel this years parade. The committee will still decorate the town to commemorate our nation’s birthday. Please continue to stay safe and always follow federal, state and local health organization guidance and government mandates.”
Other cancelled Independence Day celebrations this year in our inland area include the Alpine 4th of July parade and festival,  the Lake Murray Fireworks and Music Fest,  Ramona Fireworks, Rancho Bernardo Spirit of the Fourth parade, fair and fireworks,  and the annual cookout at the San Diego Zoo Safari Park in San Pasqual.