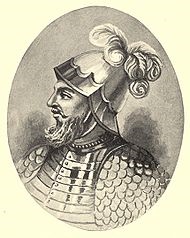 Jesus Benayas, president, The House of Spain, Balboa Park, will join us on Sept. 3 at 7 p.m. in the H. Lee House Cultural Center, 3205 Olive, Lemon Grove, to probe the century-old question -- why is there no statue in Balboa Park for its famous namesake, the first European to see the Pacific Ocean "silent upon a peak in Darien"?

The story is both fascinating and maddening.  The House of Spain has been at the forefront of the effort to bring a statue to the park at the expense of the Spanish government.  Apropos, here's one of the many kickers in this tale: San Diego's rules for Balboa Park decree that all statuary must be original, not a copy.  Yet that huge statue of El Cid in the center of the park is one of four copies of the original, which has stood outside the Hispanic Society of America (NYC) since 1930.

Benayas will fold into his discussion the impact and significance of Spain in U. S. history, going back to the American Revolution, and display interesting Spanish memorabilia connected to the birth of our nation.

Videotaping "History Alive" lectures for scholarly reference is made possible by a Community Enhancement Grant from the San Diego Board of Supervisors on the recommendation of Supervisor Dianne Jacob, District 2.  Ancillary costs of the series are underwritten in part by the Mary England Endowment for Education.