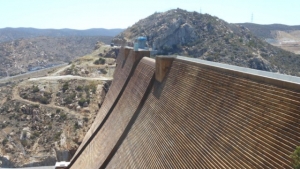 Photo, left: San Vicente Dam in Lakeside underwent the largest dam raise in the nation, rising 117 feet to its currrent 337 feet in height -- one of several steps undertaken in recent years to increase our region's water storage capacity.

October 19, 2021 (San Diego) -- California is no stranger to droughts, and while much of California is straining to conserve water, San Diego is in no such predicament.

A recent analysis from the New York Times found that San Diego, over the course of nearly 30 years, has become adept at conserving water and at preparing for dry years. The San Diego Water Authority—the agency that manages the county’s water supply—announced that the agency, "would have sustainable water supplies through 2045, even if dry conditions persisted for years."

This is good news for San Diegans, since the dry conditions that have plagued California are not expected to abate any time soon.

In another stroke of good news, it appears that while climate-change enhanced droughts have wreaked havoc in other parts of the golden state, San Diego’s seasonal rainfall has been largely unaffected by changes to the region’s climate. John Stokes, a local photographer and data analyst, has compiled data detailing the changes in San Diego’s seasonal rainfall. "According to the following chart I prepared [San Diego’s] rainfall has been remarkably steady." Stokes goes on to say that while rainfall has been consistent, there are additional factors that could contribute to water shortages in the future such as increased demand for water, and warmer temperatures. These increasing temperatures increase the need for better irrigation techniques and according to Stokes, "cause more precipitation to fall as rain instead of snow over the mountains, and with a reduced snow pack there are reduced snow melts available to feed some reservoirs during the dry season." 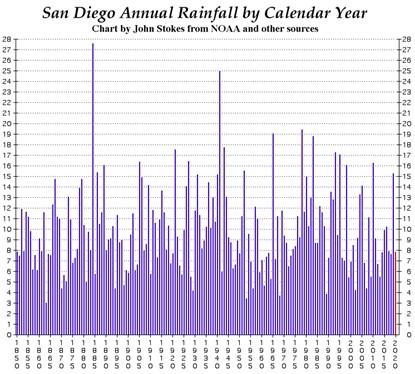 Amidst this positive news, San Diegans may be upset to find that even though the total amount of water used by the county is 30% less than it was in 1990, county residents may soon be expected to pay even more for their water. According to the Voice of San Diego, this is because "people are using less [water] and cities are starting to recycle more of it, meaning the Water Authority can expect to sell less of the water they’ve already paid to bring here. They make up their costs by raising prices." This is because of the weird payment structure the Water Authority uses to procure water from outside the region. Essentially, San Diegans are on the hook for a fixed cost even while using less of the product and so the rate goes up. That same article goes on to say, "that the Water Authority has plenty of water to sell, but not enough buyers, is becoming a harder fact to ignore."

San Diego has become a national leader and exemplar of good water conservation techniques. The region pulls water from the ocean, buys water from multiple sources, and will soon recycle its grey water as part of its conservation strategy, and a stable rainy season means that the situation should be expected to continue and even improve as time goes on.

That said, key problems remain unsolved. With expected revenue down due to increased conservation, the San Diego Water Authority may find itself in a difficult position; unable to use its decreasing revenue to pay for upkeep on existing infrastructure or purchase commitments. Even providing less water requires efficient transport and storage, and so rate increases are expected to continue. As long as the Water Authority is dependent on revenue from selling its water this dilemma will be difficult to resolve.

Earlier this year, Governor Gavin Newsom called on cities and counties to reduce their water consumption, though it remains to be seen if San Diego will be able to reduce its footprint even further. The region has done a lot to reduce its total water consumption. As mentioned before, San Diego now uses 30% less water than it did in 1990—not per person, that’s in total—even while the population has grown 35% in the same time. It may be time for other parts of the state to do their part.

As California comes to experience longer and more severe droughts due to climate change, the state may find itself coming to San Diego with questions. Luckily, San Diego has the answers.