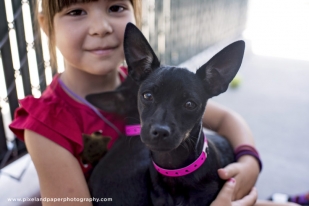 August 22, 2017 (San Diego's East County) - Lots of purring, happy barks and maybe even a cock-a-doodle-do Monday as shelter pets from County Animal Services settle into their new forever homes. They were among 306 animals adopted from the County’s three shelters on Clear the Shelters Day Saturday. That total beat last year’s total of 304 by just a (doggie) hair and a whisker.

Nearly 3,000 residents visited the County’s three shelters in central San Diego, Carlsbad and Bonita looking for just the perfect pet. Adoption fees were waived and all dogs, cats and rabbits came altered and microchipped at no cost to the adopter.

This is the third year in a row that local shelters have taken part in Clear the Shelters. The campaign is sponsored by NBC-owned television stations and Telemundo with the goal of finding loving homes for the millions of pets who end up in the nation’s shelters each year. Cities across the country took part in the event. The region’s participating shelters saw 739 animals find new homes. Nationally, 24,103 animals were adopted during the one day event.

Prospective adopters started waiting in line around 7:30 a.m. for the doors to open at 9:30 at the shelter in Bonita. Kahla Bean of San Carlos wanted to find a kitty buddy for her 3-year-old cat. She wants the two to hang out together while she’s at school. Four-month-old Monaco was perfect for the job.

“I’m so excited to take her home!” said Bean. 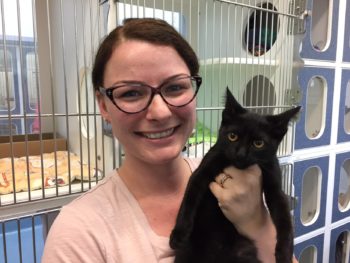 Monaco was just one of hundreds of animals adopted from County Animal Services. The other animals that found new homes included cats, dogs, rabbits, two guinea pigs, a hamster and yes, a rooster.

“We cannot thank enough everyone who was involved in this tremendous day, from the staff and volunteers, to the sponsors and, of course, the wonderful families that came and adopted!” said County Animal Services Director Daniel DeSousa.

While hundreds of animals found new homes, there are still others who are waiting for someone to love. More become available every day. If you’d like a new pet, visit the three shelters from 9:30 a.m. to 5:30 p.m. Tuesday through Sunday. You can also check out the adoptions page to see which animals are available. For more information about County Animal Services, visit sddac.com or call (619) 767-2675.

To see all the pets that were adopted, click here.