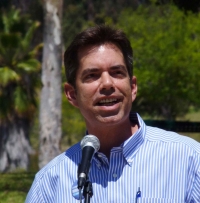 He added, “Anyone willing to put in a full day of work in San Diego should be able to support their family in San Diego.”

Recent reports have shown that the Board of Supervisors failed to apply for more than $10 million in federal stimulus funding – making San Diego the only major county in California to forego those funds. “They failed to apply for millions of stimulus dollars to hire the unemlpoyed and help small businesses,” Whitburn said in a speech at the County Democratic rally last weekend in La Mesa.
“As a County Supervisor, my number one priority will be making sure everyone who wants a job can get one. We must be innovative and explore every opportunity for our families. We certainly can’t turn down money that is there for the taking. Our community requires someone who understands the needs of working families and will fight everyday to bring jobs and dollars to San Diego.”
With East County wildfires topping the news, Whitburn also criticized Roberts and other Supervisors for failing to create a true County fire department. “You’d have thought the 2003 and 2007 wildfires would have been wakeup calls,” said Whitburn, also a spokesperson for the Red Cross. “But we continue to have fires start in the backcountry and spread into urban areas. It’s time for us to get serious about protecting the lives and property of people in this city and get serious about fire protection.”
Noting that his opponent took $800,000 in donations from the World Trade Organization which paid to send Roberts to China, Whitburn pledged, “I will not accept any gifts. It’s time for integrity.”

"What actually happened is that the Board of Supervisors, at Ron’s request through the Neighborhood Reinvestment Program, voted to provide about $800,000 over the last decade to the World Trade Center to support an Asia Trade Desk," said Tim McClain, communications director for Roberts.  He added that Supervisor Roberts "has long viewed international trade, in particular the export of goods manufactured in San Diego, as a big key to our region’s future economic prosperity. Also in the last decade, private donors contributed to a separate WTC fund that underwrote Ron’s participation in several WTC trade missions to Asia. State law has since changed to prevent an organization from underwriting such a trip."