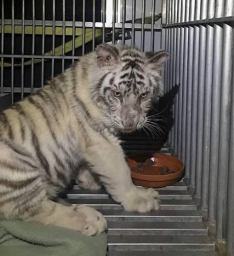 December 23, 2017 (Alpine) – Bobbi Brink and her rescue team from Lions, Tigers and Bears in Alpine have spent much of December traveling to several southern states, rescuing five black bears and a white tiger cub. The white tiger cub will soon have a permanent new home at LTB in Alpine.

According to Brink, the five-month-old white tiger cub had suffered severe neglect under a private owner in Louisiana, separated from its mother at far too early an age. “Despite her dire condition when first rescued, she has improved dramatically with proper veterinary care,’” Brink reports.  Watch her playful video here.

Next, the team is headed to Alabama to pick up three black bears, one less than a year old, all being housed in very small enclosures. Then they rescued a Syrian brown bear and a black bear/grizzly bear hybrid in North Carolina.

The bears were transported to The Wild Animal Sanctuary in Colorado, where they will enjoy open space to roam, some for the first time in their lives.

To learn more or support the efforts of Lions, Tigers and Bears (a no-kill, no breed rescue facility), visit www.LionsTigersandBears.org.