November 5, 2012 (El Cajon) -- An anonymous Facebook ad attacking three El Cajon councilmembers and another candidate has been taken down--but not before hurling blatant falsehoods and misrepresentations into cyberspace.

The ad included an unauthorized use of the City's official seal with a message claiming that the E l Cajon City Council has been involved in "lies, cheats, scandals and much more."  A letter from the city attorney indicates such misuse for purposes of distortion is a felony.

While the Council has seen its share of controversies, at least one claim made in the ad is false and others are dubious. Under a heading "criminals gone wild" the ad claimed that former Council member Jillian Hanson Cox pled guilty to embezzling $3.7 million from El Cajon. In fact, Hanson Cox pleaded guilty to taking money from her employer--not the city.

The ad further states that Councilman Wells took money from Hanson Cox for his campaign in 2010.  That date was before she was arrested by the FBI and there has been no indication that anyone on the council was aware of her wrongdoing prior to the arrest and guilty plea. The hit piece makes an unsubstantiated claim that Councilmembers Tony Ambrose and Bob McClellan are supporters of Hanson Cox.

It further describes challenger Christopher Shamoon, one of two Chaldeans in the race, as a "puppet" of the Council with zero evidence to support that allegation. Shamoon has in fact been critical of various Council policies.

The ad, listed as i48.tinypic.com/axczdg.jpg but was taken down shortly after this screen shot was taken: 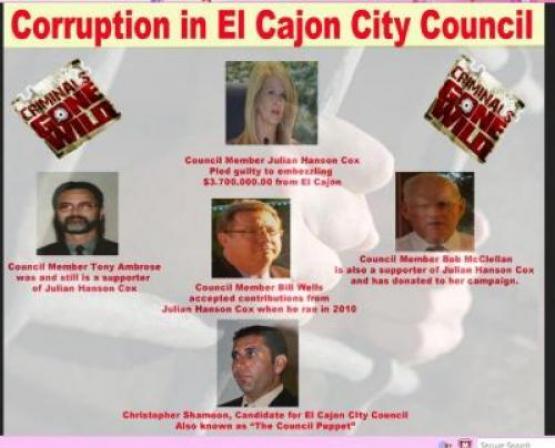 Who might be responsible for the misleading piece?  It's unknown.

There are four other candidates in the race: Ben Kalasho, Lily Schworm, Kathy Spacone, and Duane Swainston.

I am disappointed by the author’s last statement in the piece. By listing the four other candidates and asking “who might be responsible”. The author is implying that one of the other candidates may have something to do with the ad thus, making false accusations towards them. I have tried to stick with the issues regarding the city and how my education and business background will bring new ideas, new energy, and a private industry business management approach to the city. I have only pointed out how I believe the city can be managed better but I have not placed any attack ads or sent any deceptive statements/literature out to the voters regarding the other candidates. I have run a clean campaign and by inserting my name in the last statement is misleading and an attack towards my candidacy which I do not appreciate.

I appreciate you confirming that your campaign had nothing to do with this hit piece, and for the record we have never received any suggestion from anyone that you were involved in any way.  I've split the last paragraph to make clear that we do not intend to suggest that any specific candidate was behind the deceptive ad, and meant only to list all candidates in the race not already referenced in the story.