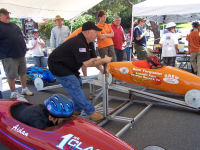 June 19, 2011 (La Mesa) --“Race to the Fair” is the theme of this year’s San Diego County Fair at the Del Mar Fairgrounds. But who is really racing to the fair?

Members of the La Mesa Kiwanis Club are.  Racing to and racing at. Club members are building a “test track” complete with a raised platform and launching rack at the fairgrounds to give youngsters ages 8 to 17 a feel for how to steer and brake the gravity-propelled derby cars.  The test track will be set up on the east side of Ag Fair (between Wyland Hall and the Sports Center) for the weekend of Saturday, June 18 and  Sunday, June 19, from 11 am to 4 pm each day.

In addition, club members will man a Soap Box Derby information booth on the first floor of the Student Showcase area under the Grandstand every weekend of the fair and on “Kids Day” Tuesdays.  The fair opens June 10 and continues to July 5.  Parents can sign up to receive information about how Soap Box Derby operates and the dates and locations of races nearest their homes in Southern California, Arizona and Nevada.

Supported by major sponsor Drew Ford, the Kiwanis Club of La Mesa conducts two rally races that attract kids from all over Southern California, and one annual “local” race especially for kids in San Diego’s East County.  Winners of this annual local derby are sent by the club to compete in the National All-American Soap Box Derby in Akron, Ohio, in July.

I read your post. Such a grate post about Race to the Fair. I think it is the only sport that is subsidized by the gambling money.