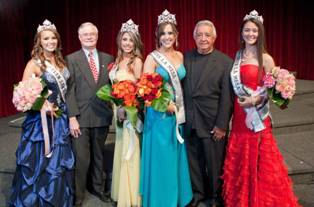 “This year Miss La Mesa and Miss Teen La Mesa will receive two sashes.”  Says pageant director Alex Kuty. “ The traditional charcoal grey and white pageant sash like the other queens around town have and a special blue and white sash with the city’s centennial logo that they can wear to all La Mesa community events to honor the city’s centennial.”

In addition, there will be 26 former Miss La Mesa titleholders representing 5 decades in attendance at the show, including Miss La Mesa 1958, former Miss California and first runner up to Miss America, Suzanne Reamo.  Mayor Art Madrid will present all the former Miss La Mesa's in attendance the key to the city and all former title holders will be wearing special centennial sashes.
Miss La Mesa and Miss Santee 2012 will receive a $1,000.00 scholarship while Miss Teen La Mesa and Miss Teen Santee will receive a $500.00 scholarship.  There will also be $1,000 awarded between four essay writing winners that the contestants will participate in.  The essay money has been donated by La Mesa Chamber of Commerce CEO Mary England in memory of her son Bobby and Sportsplex USA.
The pageant also has a participation program for girls ages 6-12.  “The La Mesa Princess and Junior Miss La Mesa programs are an exciting way for young girls to learn about their community, make new friends and look to the older girls as role models,” says Kuty.  “This is not Toddlers and Tiaras.  There is no competition or “winner.”  They will also be featured on stage during the 2012 coronation show.”
Miss La Mesa and Miss Santee contestants will be scored on personal interview, speech, poise and personality, beauty, evening gown and an on stage question.  Pageant photographers will present the Miss Photogenic award, contestant will vote for the Miss Congeniality award.  Winners will receive the once in a lifetime opportunity to serve as their cities official hostess and spend the year attending grand openings, parades, summer concerts and chamber of commerce functions.