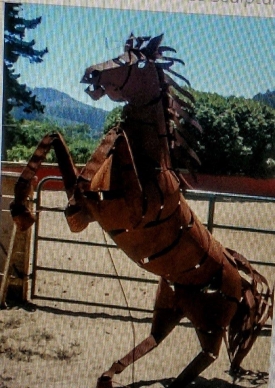 Photo: The stolen statue was similar to the one pictured.

October 12, 2019 (El Cajon) – Be on the lookout for a stolen horse – no, not the galloping variety.  A 12-foot-high, 400+ pound iron horse statue was taken by thieves using a long, flatbed truck from the Double S Tack and Feed Store at 14335 Olde Highway 80 in unincorporated El Cajon.

I am so sick to my stomach......our iron 12 foot high horse that sits next to the round pen and propane tank that has been a fixture at Double S for 10 years was stolen out of our yard. This picture is almost exactly what he looks like....it had to have been at least 3 people to remove him from the iron stakes and chain that kept him safe and we are working with the police on our camera footage but they tampered with the cameras as well.....what kind of people do this.....do these people still come in the store.....are these people planning to steal from us again.....this 12 foot horse weighed at least 400#'s.....I'm so sad and sick.....

Double S Tack and Feed Update - I have him on camera coming in the back gate and then he takes the horse to the front gate where a long flatbed truck with something that looks like a forklift on the back picks him up with the horse - tomorrow the police will be called and going to the businesses across the street to hopefully get camera footage as I could get a clear video of the large truck, but the truck is definitely some kind of work truck! They knew exactly what they were doing!

Community members on Facebook offered theories on possible motives ranging from a high school prank to professional crooks looking to sell the statue, perhaps as artwork on the black market, or perhaps to a scrap metal recycling yard.

A photo of a statue similar to the missing statue is being shared on social media.

The owner hopes that by sharing the story broadly, the thieves will be found – or perhaps decide to return the stolen stallion statue.

If you have any information on this heist, please call the Sheriff or contact the Double S Tack and Feed Store at (619) 443-9211.

A comment has been removed for a threat of violence, a clear violation of our site rules. If the poster wishes to repost the porton of his comment that did not suggest violence, he may do so.