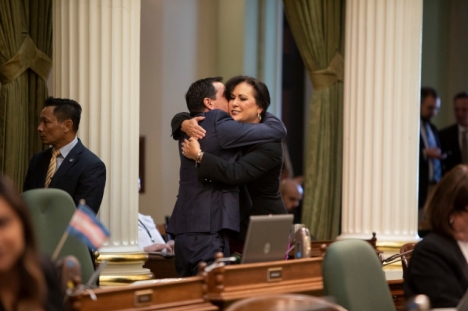 Gov. Gavin Newsom has committed to signing the bill, which cleared the Assembly 56-15 in a challenge both to the longstanding trend toward outsourcing labor and to the business model of companies such as Uber, Lyft and DoorDash, who have threatened a $90 million fight at the ballot box.

Once signed, AB 5 would upend longstanding employment practices that have seeped into the Democratic presidential debate about how workers should be treated, particularly in today’s gig economy.

“With one clear test across our state labor laws, we will raise the standards for millions of workers and ensure they gain access to critical rights and benefits,” said Sen. Maria Elena Durazo, who presented the bill in the Senate on Tuesday night. “We can make California the global leader in protections for gig workers, janitors, construction workers and so many working people who can’t even pay their rent.”

Lyft spokesman Adrian Durbin said lawmakers missed an opportunity to find a flexible solution for rideshare drivers and Uber announced it was ready to pour millions more into the ballot fight. “We are fully prepared to take this issue to the voters of California to preserve the freedom and access drivers and riders want and need,” Durbin said.

From the beginning, the bill’s author, Assemblywoman Lorena Gonzalez, a labor organizer and a Democrat from San Diego, made clear her goal was to improve wages, workplace standards and expand the right to collective bargaining at a time of growing income inequality. 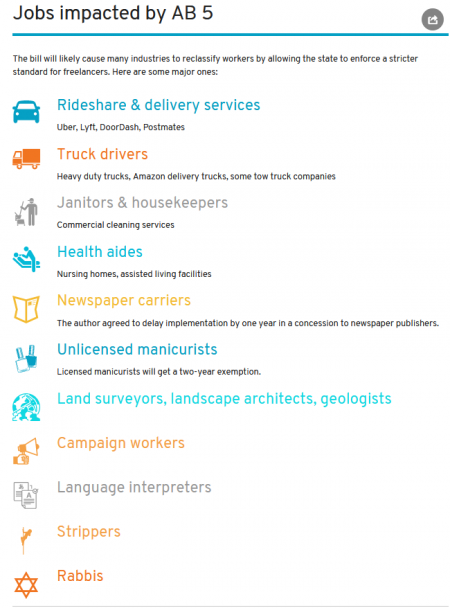 She acknowledged more work remains but insisted the legislation is needed to establish a state standard after the California Supreme Court, in a landmark 2018 decision, created a strict test for certifying independent contractors, with the highest hurdle being that the work performed must be outside the core of the company’s business. It’s commonly referred to as the Dynamex decision. 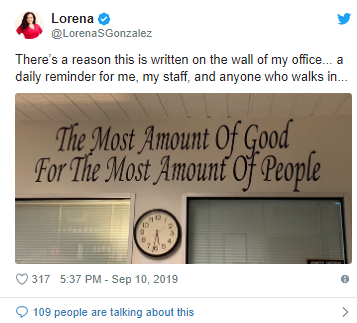 In advance of the vote, she shared a picture of a sentence plastered to the top of a wall in her office: “The Most Amount Of Good For The Most Amount of People.”

California’s pushback against the gig economy intensifies pressure on Silicon Valley flagships such as Lyft and Uber, which were already trading below their IPO share prices amid investor concerns about the difficulty they’ve had turning a profit, despite many millions of users. Uber cut 400 people from its marketing team in July, reported a quarterly loss of $5.2 billion in August and sent layoff notices to another 400-plus workers this week.

On Wednesday, Uber’s chief legal officer Tony West said in a press call that the company plans to fight the tougher employment test once AB 5 takes effect next year. “We still may pass the test,” he said. “We believe we can pass the harder test.”

But concerns around basic worker protections also have become pressing in California, where one worker in three earns less than $15 an hour and the 18.2% poverty rate, when the cost of living is taken into account, is rivaled only by that of Washington, D.C. As lawmakers were debating AB 5, in fact, a commission on the future of work, appointed by Newsom, was convening not far away in Sacramento to address such issues as the proliferation of low-wage jobs, automation, artificial intelligence and the gig economy.

Aside from the philosophical questions around AB 5, the state estimates it loses about $7 billion a year in payroll taxes due to worker misclassification that could be supporting schools, roads and other public services. Supporters of the bill argue that by avoiding unemployment insurance taxes and workers’ compensation premiums, businesses shift the burden to the state — and its taxpayers — when workers get laid off, get sick or get injured on the job.

Opponents warned the bill will invite trial lawyers to file frivolous lawsuits against thousands of California businesses and called the bill a blatant power grab by big labor.

“This bill is the union caucus’ main event of the year,” said Republican Sen. Jeff Stone, who held up an exemption request form, obtained by CalMatters, that labor groups had been presenting to industry advocates seeking a carve-out.

Industries as varied as trucking and health care also pushed back, arguing that the legislation would rewrite the rules for independent workers whose status has worked for them for decades.

“AB 5 does not take into account the more than 70,000 California truckers who have built their business around the independent owner-operator model, invested hundreds of thousands of dollars in their trucks and have made the decision to run their own businesses,” Shawn Yadon, CEO of the California Trucking Association, said before the bill passed.

Hospitals, too, are worried the bill will not only cause confusion but may have the unintended consequence of delaying patient services. Gail Blanchard-Saiger, vice president of labor and employment at the California Hospital Association, said although doctors, psychologists and podiatrists are exempt from AB 5 and hospitals employ more than 90% of their workforce, many medical professionals such as physical therapists and certified registered nurse anesthetists are contracted at small and rural hospitals where volume is low.

“The impact on the hospital for these health professionals is probably a delay in services and in particular rural communities maybe a reduction in services,” said Blanchard-Saiger. 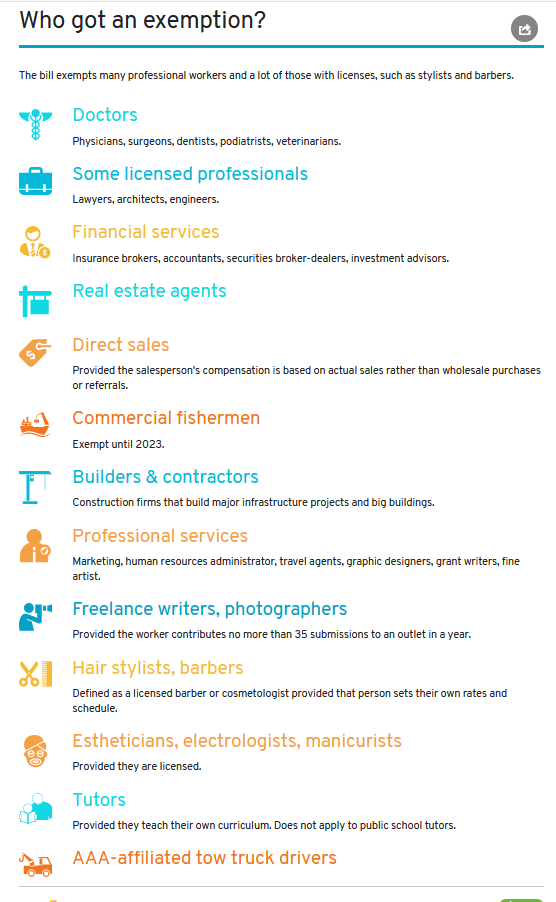 In the final weeks of the legislative session, gig companies unsuccessfully campaigned heavily for a new, first-in-the-nation framework that would allow their workers to remain independent while offering a wage floor and some kind of bargaining tool. And on Tuesday, Newsom told The Wall Street Journal that he is still talking to Lyft and Uber “and regardless of what happens with AB 5, I am committed, at least, to continuing those negotiations.”

The San Francisco Chronicle reported potential legislation calling for a new category of workers — to be known as “network drivers” — to cover rideshare and delivery service drivers, guaranteeing at least 1.27 times minimum wage, reimbursement of 30 cents a mile and contributing 4% to a Drivers Benefits Fund to purchase workers compensation insurance and other benefits.

Uber and Lyft say the codification of the Dynamex decision — that established a three-part test for certifying contractors — will force them to fundamentally change their hiring practices. It likely means the rideshare industry will take on fewer drivers and assign shifts, giving drivers less flexibility.

Labor representatives called it a scare tactic and said nothing prevents companies from maintaining flexibility for workers.

In shifting to employee status, companies would have to offer basic worker protections such as guaranteed minimum wage, overtime pay, contributions to Social Security and Medicare, unemployment and disability insurance as well as workers’ compensation, sick leave and family leave. Workers could also get reimbursed for mileage and maintenance of their vehicles, which doesn’t happen now.

The bill triggered several rounds of protest at the Capitol with Uber and Lyft drivers circling downtown Sacramento one day followed by truckers honking their heavy duty trucks the next day.

Under the final version of the bill, doctors, dentists, lawyers, architects, engineers, accountants, insurance agents, real estate agents, hair stylists and barbers received exemptions. Travel agents, graphics designers and grant writers will continue to offer their professional services without disruption. Licensed cosmetologists and barbers that set their own rates and schedules won’t change. Commercial fisherman are exempt until 2023. Tow truck drivers affiliated with the American Automobile Association got a carveout. And freelance writers and photographers can continue provided they don’t submit more than 35 submissions to an outlet a year.

On the other end, AB 5 captured the industries targeted by labor: gig workers; big-rig, Amazon and other truck drivers; and low-wage services ranging from janitors to home health aides. Unlicensed nail technicians, language interpreters, musicians, strippers and even rabbis could be impacted.

If approved, the bill will take effect in January and allows the state attorney general and large cities the right to sue companies that don’t comply. San Francisco City Attorney Dennis Herrera and Los Angeles City Attorney Mike Feuer both say they would ensure workers are treated fairly.

“The city attorney welcomes the new authority and if enforcement action is needed under the new law, he will exercise it,” said Feuer’s spokesman Rob Wilcox.

During debate before the Senate vote, Republicans sought to include hostile amendments aimed at expanding exemptions for newspapers, physical therapists, the timber industry and more. Each was tabled by Democrats who control both houses of the Legislature.

Gonzalez, however, did agree to exempt the newspaper industry from converting carriers for one year.

“While I personally disagree with this delay, I’m willing to allow the newspaper industry the additional year to comply if it means those delivery drivers and nearly a million other misclassified workers are provided the minimum wage, benefits and workplace rights of Assembly Bill 5,” she said.

A few industries did get the exemption they sought, such as builders and contractors. Peter Tateishi, CEO of the Associated General Contractors of California, said his organization ended up backing the bill after being allowed to contract with other contractors under a business-to-business carve-out.