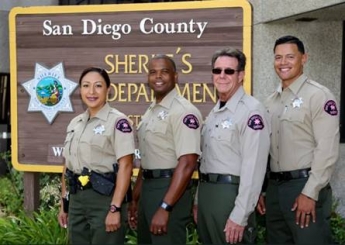 October 2, 2018 (San Diego) - During the month of October, Sheriff’s deputies have the option of wearing a pink version of their uniform patch. The patches are a great way to spark a conversation with the public and bring attention to the fight against breast cancer during the awareness month.

The #PinkPatchProject started with the Seal Beach Police Department in Orange County in 2013 and is now a nationwide effort. This is the second year the Sheriff's Department is participating in this public awareness campaign.

For ten dollars each, the public can purchase the commemorative patches during business hours at the Deputy Sheriff's Association (DSA) store located at 13881 Danielson Street in Poway. Call (858) 486-9009 for more information.

Pink patches sold to the public will hold no law enforcement authority and are meant to be used as a collectable item only. Money raised will be donated to Dr. Susan Love Foundation in Encino for cancer research.