October 10, 2018 (San Diego’s East County) — James Elia, the Democratic nominee running for State Assembly in the 71st Assembly District, has been clamoring to debate his opponent, incumbent Randy Voepel, a Republican. But Voepel has gone to extremes to dodge debates and candidate forums, even ducking out of the building when a fire alarm conveniently went off at a recent even where Voepel was slated to speak and spotted his opponent in the room.

At a forum October 6th at Lantern Crest Senior Living in Santee for local council candidates, organizers invited candidates for other offices including Voepel to speak to those present.  “He saw me and immediately froze,” says Elia.  “I said there are people here, they want to hear us….let’s get this done. He walked away.”

Moments later, a fire alarm went off.  Elia says he stayed to help seniors evacuate the theater; minutes later the alarm stopped and everyone went back inside.  But not Voepel, who had vanished.

It isn’t the first time Voepel avoided appearing onstage with Elia, who has offered to debate Voepel any place, any time, in any format.

Elia says he drove all the way to Idyllwild in the mountains of Riverside County for a debate at which Voepel’s staff had indicated Voepel or a staffer would show up. Later staff said they might merely send answers to written questions, but when Elia arrived, Voepel was a no-show. There was no staffer, nor even written answers provided to questions sent by the event organizers, a progressive organization.

Other groups including the Elks Club and National Action Network have sought to hold debates or candidate forums, but thus far Voepel has not agreed to participate in any of them.

Voepel did not respond to our message requesting comment for this story. However, during a fundraiser for Alpine fire survivors recently,  Voepel spoke with ECM editor  Miriam Raftery. Asked if any debates or forums were planned with his opponent, Voepel said he believed he could win without doing any debates or forums, and saw no reason to participate.

Voters wishing to hear from both candidates on the issues may view that as a disservice to the public.  By dodging debates, Voepel also deprives the public and press the opportunity to ask about recent controversies, such as allegations raised by Larry Wilske, a retired Navy Seal defeated in the primary who accused Voepel of stolen valor, or inflating his military record.

Voepel closed Copperhead Copper Trading Company when he launched his Assembly run. The website has been scrubbed off the Internet, but ECM has a copy which you can view here.  Below is the website homepage text by Voepel, published on his now defunct company webpage:

Copperhead Copper Trading Company LLC, started out with a crime being committed in the year 2010.

My name is Randy Voepel, Vice President of sales for Copperhead; I am also the Mayor of Santee California. In 2010 the City of Santee opened a beautiful 55 acre park in our town center, with state of the art lighting, ball fields, etc. Immediately, copper thieves descended upon the park in the dark of night and stripped thousands of dollars of copper wiring, buss bars, anything to do with copper. Our great County Sheriff's caught all of the thieves but it cost a large amount of money to replace and repair all of that copper.

Observant fellow that I am, I started thinking about how people were risking their lives thru electrocution, falling and other injuries to get their hands on that shiny metal. I thought to myself "That copper stuff must be valuable, I want some"!

That started my search to buy copper at a reasonable price. Sounds easy right? Well it took me 4 long months of searching to figure out, at least for me, that buying small amounts of copper under $11.00 a pound plus shipping, is almost impossible. I called, Emailed and chased copper mines, metal dealers and any other logical sources of copper. If I wanted 10 metric tons of Copper, in 320 pound Cathodes and paid the $100,000 up front plus shipping they would sell to me, maybe. Many things looked dodgy to me in this Copper game. The key here, is trying to get your hands on a modest amount at a modest price. Finally I was forced to start Copperhead Copper Co. to get Copper under MY conditions. This is America. If you can't find something you want on the market, make a market. That is what I did.

Copper is a commodity and is one of the most used metals on the planet. Gold and silver may be out of the affordability range for many average people, but buying and physically owning Copper is doable for most of us folks. Like Gold and Silver, Copper has never been worth zero in the history of our civilization. If we have hyper-inflation or an economic meltdown, copper trade bars may be even more liquid than gold or silver.

I have found an honest supplier that will sell me the Copper I want, in about $20,000 chunks, money up front. Here is what and how I am selling, prices subject to change reflecting the Copper market: 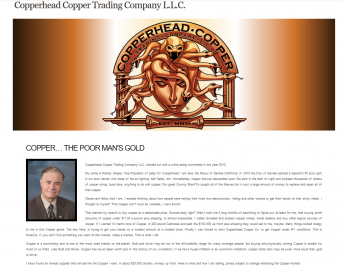