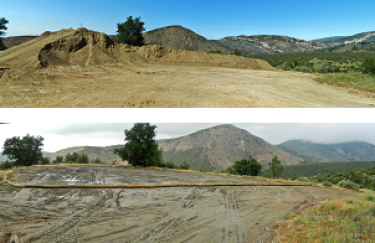 April 26, 2015 (Cleveland National Forest) – The County has begun a major cleanup of dirt dumped along Boulder Creek Road that polluted a federally protected watershed in response to an East County Magazine investigation.

Eagle Peak Friends and Collaborators, a concerned citizens' group, posted a video on its Facebook page documenting massive quantities of dirt dumped along Boulder Creek Road inside Cleveland National Forest in San Diego’s East County.  The group contended that the County is responsible for dumping 20,000 cubic yards of dirt from road-grading inside the federally recommended Eagle Peak Wilderness area.

Before our inquiry, nothing appeared to have been done to halt the county’s actions, which had gone on for many months or more, a whistleblower told ECM.

The soil dumped at the site inside Cleveland National Forest contains noxious weeds, invasive and flammable species, the video states, adding that silting can be seen a half mile downstream.  Silting streams can harm fish already stressed by drought and county dumping next to sensitive wilderness areas may violate federal laws including the Clean Water Act, Endangered Species Act, Forest Land Management Act and National Enviornmental Quality Act as well as the California Enviornmental Quality Act.

Boulder Creek feeds the spectacular Three Sisters Fall, one of the jewels in San Diego’s wilderness area—an area so stressed by hikers’ incursions that the Forest Service is currently redesigning a trail leading to the attraction.

The County isn’t the only entity dumping dirt along Boulder Creek Road. SDG&E has also dumped dirt from its projects in the area, but will be required to stop and clean up its grading in the future under a new master plan agreement with Cleveland National Forest.

East County Magazine contacted Supervisor Dianne Jacob’s office with a copy of the video and questions on why the seemingly illegal dumping was continuing. Her staff immediately forwarded our questions to communications specialist Gig Conaughton, who responded within 24 hours.  He thanked us for bringing the issue to the county’s attention, adding, “The County Department of Public Works is implementing a routine road maintenance project on Boulder Creek Road and our stockpiles that are related to this effort. The County will immediately install proper erosion control BMPs on the stockpiles, and we can provide additional details and any actions that may be needed once we have completed a full review of the situation.”

Cindy Buxton, a leading environmental voice in East County, called the speed of the county’s response “amazing” and said the County got the dirt piles covered within 24 hours of receiving our inquiry.  She said the response is “appreciated” but added that it doesn’t fully solve the problem since “they repeat the process” and “obviously the dirt washes away after a few storms and there is a lot of it.”

She provided before and after photos of one site that’s been cleaned up. (See photos at top of story.)

East County Magazine has contacted Cleveland National Forest to ask why this dumping was allowed. Anabele Conejo sent this reply: "The Cleveland National Forest requested a meeting with the County’s Department of Public Works through the Road Station that oversees Boulder Creek Road approximately a month ago. Our intent is to discuss with the County how we can better work together to meet their road maintenance needs along Boulder Creek Road while protecting water quality and other values on the National Forest."

The County wants us to cover any piles and put up BMP for even the smallest project. They do something like this and don't abate till they get caught. and, the angry part is, they really do not think these rules apply to them. It is far past time to start at zero on the County Government and don't forget the second American Revolution!

I hiked and camped in the area. It was a little known gem in the east county in the past.
Kitchen Creek road was another favorite drive, the Border Patrol took control of the area and closed the road. Public land, no public access.