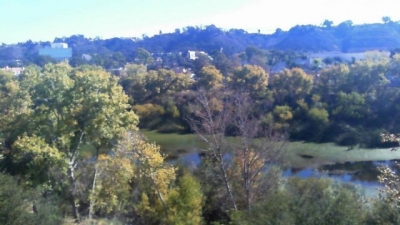 November 13, 2013 (San Diego)--Living on the San Diego River can be amazing.  For a while, it seemed to change every day.  It could be dark green and deep, beautiful with a flowing current.  Living here gives you a sense of being on a camping vacation every day, just by looking at it. Yet we are still in central San Diego. Since it is a nature preserve, many wild creatures come and go, making the river their home.  Some permanent, some temporary.

I remember when the river had a murder of crows that nested in a tree, just off our balcony.  They would wake us up every morning and greet the sunset near our place every night. They sure did pester us, but it was a lively sign of nature. Then there was the time that a whole family of turtles appeared on the river bank, on the opposite side of the river, and before we knew it, we could see a bunch of baby turtles through our binoculars.  With the next rain though, they were gone. Apparently, there are fish in the river too, and even a few hardy souls who kayak there that want to get away from their wives and kids for a few hours for some catch and release fishing, floated their torsos in the boat and their feet in the water when the level was higher.

The water level is very low now and too much algae make the river look unpleasant.   After researching the causes for this, by contacting the San Diego River Park Foundation, River Watch Division Coordinator, Shannon Quigley Raymond, I found out that basically, this is due to a lack of rain.  Rainfall has been very low this autumn and the River Watch has decided to not introduce any chemicals or algae skimmers to reduce algae and just let nature take its course.  Nutrient level aren’t particularly high and there aren’t any increased phosphate or nitrate levels either.  However, there are high levels of conductivity which the River Watch is concerned about. It doesn’t look pretty, and if the housing market wasn’t so tight, it might affect property values.

The River Watch hasn’t concluded that this is due to climate change or an inordinate amount of pollution from any unusual source as the current water quality chart below indicates. According to the National Weather Bureau, at, http://www.wrh.noaa.gov/sgx/climate/san-pcpn.htm, 2013 did not have the lowest amount of rainfall in November.  1980 had 0 inches rainfall, while 2013 had .9999 inches.  So it is still very low. The heat makes algae grow. The algae also increases the amount of mosquitoes that affect local residents. After being bitten, we had to install screen doors at every entrance of our condo facing the river. Mosquito Abatement flies helicopters with insecticide to combat West Nile Virus. River Watch Coordinator, Ms. Raymond claims the insecticide is not harmful to humans.  After contacting, the County Water Department, http://www.sandiego.gov/water, the San Diego Environmental Health Department,http://www.sdcounty.ca.gov/deh/about/ contact.html and Andrew Hughan of the Department of Fish and Wildlife, http://www.dfg.ca.gov/news/contact.html, River Watch Coordinator, MS. Raymond was the most helpful and knowledgeable.

If anyone is concerned about the algae and the river’s water quality, and wants to volunteer, the San Diego River Foundation River Watch is having a river monitoring meeting, Sunday, Nov. 17 at 8AM at 4891 Pacific Highway #114, San Diego, 90210. River Clean Up is Wednesday, December 18th 9am-1pm. 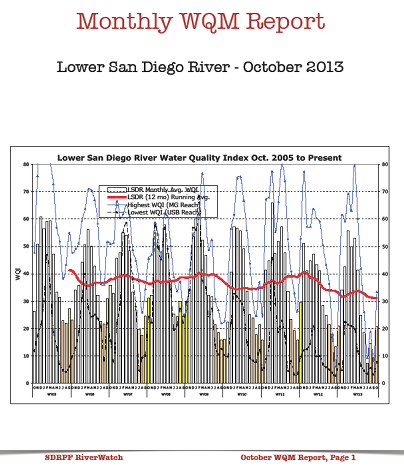