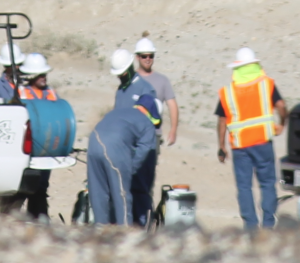 April 1, 2015 (Ocotillo) – Residents of Ocotillo after discovering in late March that a powerful herbicide was been sprayed on desert soil over a federally protected aquifer – the town’s sole-source water supply.

ECM photographer Jim Pelley, an Ocotillo resident, photographed workers spraying the substance on Bureau of Land Management public property.  “A BLM representative was there and they told me they were spraying Round-UP Pro,” Pelley says.

On March 22nd, Reuters reported that the World Health Organization’s cancer arm, the International Agency for Research on Cancer, concluded that glyphosate, the active ingredient in the Monsanto Company’s herbicide, RoundUp, is “classified as probably carcinogenic to humans."

East County Magazine has contacted Senator Barbara Boxer, ranking minority member on the Senate Environment and Public Works Committee, to request comment on this issue and we will report back once a response is received.

Some have tried, no takers.  At the very least they should have been compensated for their lost property value and given the option to relocate, as is done via eminent domain for freeways.

...if between the wind turbines and now spraying if someone is trying to force the residents of Ocotillo to move?

Glyphosate is not a proven carcinogen. The EPA does not currently consider glyphosate carcinogenic. WHO: The low mobility of glyphosate in soil indicates minimal potential for the contamination of groundwater. Glyphosate can, however, enter surface and subsurface waters after direct use near aquatic environments or by runoff or leaching from terrestrial applications. I imagine that the water supply in Ocotillo is routinely tested..

Why is this product being used in the desert? I doubt that there are any invasive plants there. It's a toxic chemical.
https://en.wikipedia.org/wiki/Glyphosate