February 27, 2012 (Ramona) – San Nicolas Island is best known as the setting for the novel Island of the Blue Dolphin.  But the isle in California’s Channel Islands was also used by the Navy—and a colony of wild cats believe to be descended from pets of naval personnel  were hunting wild birds and lizards, endangering native species including foxes.

The Navy was prepared to kill all of the feral cats—until the Humane Society and the Fund for Animals stepped in.

According to the Los Angeles Times, capturing the wild felines took $3 million, paid for mostly by the Montrose Settlements Restoration Program, an organization that helps restore coastal areas.  But the cats proved elusive—until a bob cat tracker set up trails a baited humane traps with catnip, urine and scat. 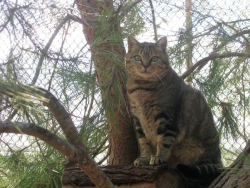 In 2009 and 2010, 59 cats were captured and transported by plane from San Nicolas to Ramona, where the Fund for Animals Wildlife Center set up a special shelter.

Acccording to ECM news partner 10 News, the cats actually evolved into their own breed, with shorter tails and shorter legs for burrowing, since the island has no trees.

Dedicated volunteers have been working  to socialize the cats—with some success.  Some are now able to be handled and have adapted well to human companionship.

Fifteen cats, including a dozen kittens, have been adopted.  Twelve more adult cats are now available for adoption, and more may be seeking new homes soon.

The operation has been deemed a success, since no more cats have been sighted on the island.

To view a video on the Humane Society website about these special cats and see a webcam, visit: http://www.humanesociety.org/animal_community/shelters/ffa_wildlife_center/webcam/