July 24, 2013 (Ocotillo) - In a dramatic video, award-winning videographer Jim Pelley takes a wild ride along a flooding roadway in the heart of the Ocotillo Express Wind Project.  The brief storm, which lasted only an hour, closed Highway 98, also washing rocks and debris across access roads. (Note: video contains strong language as Pelley struggles to escape the rising floodwaters.)

Pelley, an engineer and resident of Ocotillo, has long contended that changes to natural drainage patterns made by the wind project developer, Pattern Energy, would worsen flooding in the region.  Ocotillo is in a federally designated flood plain, but area residents have said that in the past, it took hours of heavy rainfall to cause serious flooding.

What will happen when a longer storm hits?  Residents are concerned over the prospect of even worse floods in the future.

During public hearings in the approval process for the project, some residents testified that they recalled floodwaters rising four to six feet deep inside homes, yet this project was none-the-less approved to be built on public lands.

Floodwaters also jeopardize the town of Ocotillo in the project's midst. 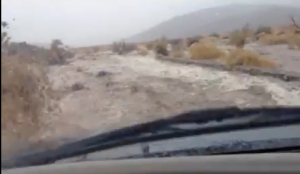 The trouble-plagued project was offline for several weeks after a heavy blade fell off a wind turbine manufactured by Siemens.  Even before the prolonged outage, the project produced only 19% of capacity in its first few months of operation--far less than Pattern predicted in order to pocket federal subsidies.

In addition, the California Native American Heritage Commission has ruled that the federal government erred in approving the project on lands deemed sacred, including ancient burial and ceremonial sites.  The Commission has asked the state's Attorney General to consider legal action against the Bureau of Land Management.  Several members of the NAHC indicated that they believe the most appropriate mitigation would be to tear the project down.

In addition to the featured video above, Pelley also shot a second video showing a road washing out during the storm in Ocotillo:

People entering the desert would do well to educate themselves on survival in the desert not the least would be flash flooding and what to do to survive during storms.  Staying in low ground or arroyos is not a good choice.  Flash floods can come through in a wall of water and sweep people as well as automobiles away.  The water following the road they were on didn't dam up and then break through causing the flash.  It is good your contributors got out safely.

Remarkable footage and story, both of which demonstrate that the massive, irreparable damage to the area caused by the construction of the wind farm will continue indefinitely.

Besides proving how sudden, dangerous and forceful flash floods really are,  your video makes one wonder what in the world were the people who approved of this project thinking of when they planned to denude the desert, in a flood plain no less, to build a wind farm?