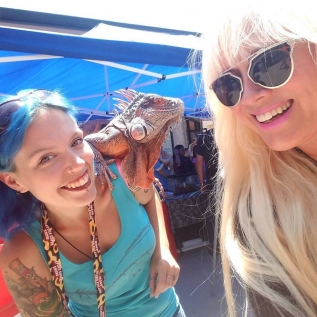 Hunting down the wildest jobs in San Diego’s East County

June 26, 2017 (La Mesa) -- “I saw Jurassic Park, I know how this ends!” said MAX 105.7 FM DJ Rob Zilla of his fellow DJ, Karen “ChaCha” Harlow.  ChaCha was sitting in a self-styled snake pit with a red-tailed boa, among other reptiles, at La Mesa’s Grossmont Center’s courtyard on Saturday, June 24th.  It was all part of the job—for a good cause of bringing in food donations for The Jacob & Cushman San Diego Food Bank.  Thankfully, Jurassic Park’s grisly endings went unrealized.

“I hope they fed these,” quipped ChaCha about the boa.  At times, she used the boa as an accessory scarf around her neck. The boa had no problems with this Brittney Spears inspired type move. ChaCha was not going to exit the snake pit until more and more food donations were delivered. 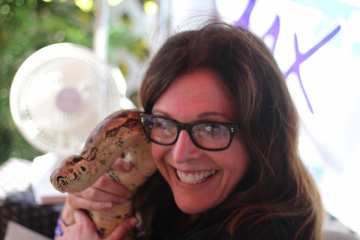 The snake pit, San Diego, and being on radio are all part of a home-coming of sorts for ChaCha.  She was an on-air personality in Los Angeles for 10 years.  In 2016 MAX 105.7 offered her a job after she did a dramatic “public plea” for a job atop a 30-foot lift.

“I started in radio in the 80’s with Z90 back when we crossed the border to Tijuana,” ChaCha recalled. She attended local schools and graduated from San Diego State University Additionally, besides XHTZ-FM/Z90, she was afternoon drive host on KHTS-93.3 FM.  In Los Angeles, she was an on-air reporter/host, and anchor on CBS Radio for news radio KNX 1070 AM.

MAX 105.7 also invited the San Diego Reptile Association to participate in this snake pit event.  Association vice-president Janell McMorgan said, “We bought 16-17 different animals.”  An iguana named Fluffy, a trans Peco Rat snake, California king snake, a San Diego gopher snake, and a western banded gecko were just part of the snake pit event, although not all of them made it into ChaCha’s enclosure.

People who bought food donations for ChaCha’s cause and shoppers like Bennett Smith, 8, got to enjoy seeing and touching the reptiles. Smith admitted, “I have had a snake around my neck at school,” as for his past exposure to reptiles. 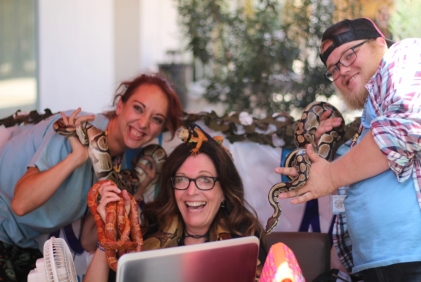 Raising food donations for The Jacob & Cushman San Diego Food Bank was the primary goal.  Their president and CEO, James A. Floros, was on hand to do an interview on MAX 105.7 and to comment about food drives.

“We feed more than 370,000 people in a month,” said Floros.  They also teach healthy eating and cooking to those in need. Contact www.sandiegofoodbank.org  to contribute.

In the end, ChaCha, had 2,187 canned goods delivered.  This fun time and act of charity all came about because ChaCha created the idea, acted on it, and implemented it.  Expect more fun, facts, and creativity from ChaCha in the future.