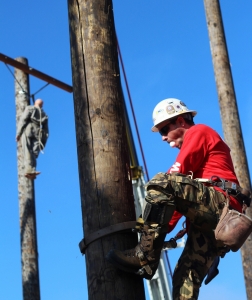 August 9, 2017 (Alpine) — “I hear you singin’ in the wire,” lyrics from “Wichita Lineman” released in 1968 by the late Glen Campbell, are words many linemen might know by heart and perhaps sang under their breath at the 17th annual SDG&E Gas and Electric Lineman’s Rodeo held August 5th in Alpine.

This was my first rodeo.  Lineman rodeo that is. This rodeo had a forest-like section of 30 power poles, vendor booths, a gas line competition area and more.  It was organized by a longtime lineman, Sempra Utilities’ Joe Torres, and others.  The event took place at the SDG&E Alpine Yard.

Torres’ wife, Rebecca, who was working the sign in table, noted, “We have 24 teams—apprentices and journeymen.” Dozens of teams representing SDG&E, Pacific Gas & Electric, Southern California Edison, and many more compete in this qualifying event for the International Lineman’s Rodeo & Expo to be held in Kansas in October. Yes, the state where Campbell’s “Wichita Lineman” was set.  The song recounted the loneliness of those working on power lines.

Rebecca Torres recalled ‘When we first got married I was scared to death.  I used to g 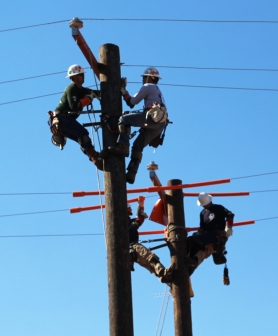 o on calls.  I wanted to be there in case something happened.”

Something horrific did happen when a local man, Thomas “Tommy” Hopewell, a lineman, died on the job in 2015.  Per Joe Torres. they dedicated one competition to his memory.

But events like this rodeo help hone and develop skills for on the job expertise. The actual competitions were broken down into rodeo events with names like egg climb, hurtman rescue, obstacle course, rope slice, cross arm change out of an energized 4 KV, and more.

A chili cook off, bucket truck rides, rock climbing wall, pony rides all helped to make it a family event.

Nate Fairman and Adrian Moore, International Brotherhood of Electrical Workers (IBEW) Local 465, were headed over to do the egg climb where the linemen scale a power pole with an egg in their mouths. The rules require it remain unbroken going up or down.  Moore, when asked tricks of the trade, said, “We choose our own egg.”

Personally, I would not recommend using ostrich eggs, dinosaur eggs, or extra-large eggs to do it.

Amy Humbert, from Bakersfield, there to support her husband Tony, said, “He competed as a contractor apprentice in the 2002 International Lineman’s Rodeo in Kansas.  He took first place in the contractor’s division over-all.”

“Teams from Jamaica, Canada, the USA plus competed in Kansas. Jamaica won an award,” Humbert elaborated. Besides the rodeos her husband helped in the recent Maricopa, Arizona fires and was also down in New Orleans after Hurricane Katrina hit.  “They actually had the National Guard on their truck’s running boards. People were shooting at them.  They wanted their electricity turned on,” she recalled. Such is life as a lineman. 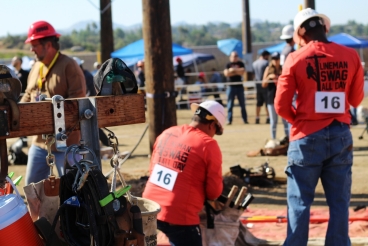 These linemen came from far and wide. Joe Torres noted that when these linemen, their family, and friends visit some stay in Alpine, at the Viejas Casino and Resort, while others just show up in the morning.

So, lassos, little doggies, bucking broncos, and rodeo clowns seen at traditional rodeos were all traded in and “rebranded” into power pole climbing, saving 250 lb. dummies, and gas line exercises at the lineman’s rodeo in Alpine, though like any rodeo, this one included bragging rights and trophies handed out in the end. 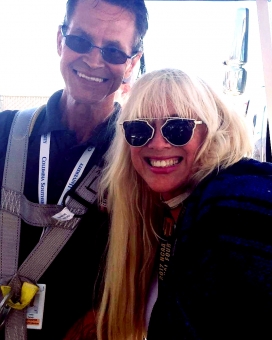