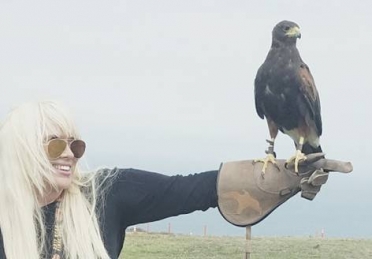 July 26, 2017 (Alpine) -- Falconry – the sport of kings, can now be the sport of East County residents and others.  Kirk Sellinger and Denise Disharoon operate an Alpine-based company called Sky Falconry that offers a basic falconry class plus a Hawk Walk.

They offer a chance to get up close to their birds of prey at two sites: in Alpine from October to May and at the Torrey Pines Gliderport in La Jolla from June to September.

The basic falconry lesson they offer provides the history of falconry, a chance to ask all the questions you want about Harris’ Hawks or Lanner Falcons, and a chance to put on the leather glove and have one of their collection of seven birds land on your hand, among other activities. 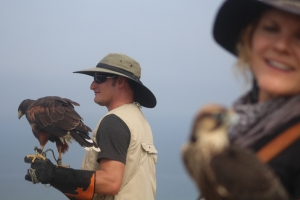 One of the surprises is the weight of the birds. In a recent falconry class, the guesses from the class were much higher than the 1-1/2, 2, or 2-1/2 lbs. that Sellinger said they weigh. What is their life expectancy? Sellinger said, “There is no straightforward answer.”  Many factors come into play for raptors in the wild, including bobcats, coyotes, even other birds of prey. In addition, Disharoon noted, “They do get hit by cars, and insecticides have a profound effect on raptors.”

Falcons are not picky eaters. Per Disharoon, “They do not care if their prey is dead or alive when they eat it.”  Small wonder those mice and rabbits run as fast as they can to get away if they sense that a falcon is nearby. Watching the raptor eat a mouse is a dietary aid for some.  Me included.  No need to eat for a few hours.

These birds primarily rely on their keen eyesight, says Disharoon, adding, “They could read a book two miles away.”

The bird of prey got close enough to my hair to have them quip, "You just got a new hairstylist."

Sellinger says, “They are exceptional at reading body language.”

Charles Winter of San Diego, brought his young son, Woody, to the class. “This is his fourth time.  He asked to do it,” he said. “He must have seen it on a nature show.”

In addition to the falconry classes, Sky Falconry offers a Hawk Walk in Alpine, where according to their website, you can “put a glove on & free fly a bird of prey.  Take an exciting interactive walk with a hawk.  Observe the raptor in its natural habitat” including “amazing long flights & more.”

Sellinger and Disharoon are active in educating all about birds of prey.  They have been TV, including Animal Planet and the BBC, among others.

“I did abatement at the Hotel del Coronado protecting hamburgers,” quipped Sellinger.  More and more resorts use companies like theirs to protect their customers when they are dining on patios or outside the resort, since raptors help keep away the seagulls. 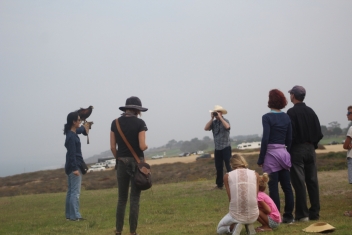 So how did the couple get into their unusual occupation?

Selllinger traveled internationally from the Galapagos to Antarctica and filmed nesting areas, developing a fascination with birds, according to the Sky Falconry website.  In 2010 he realized his dream of becoming a falconer. He also began flying with his bird in a paraglider, an activity known as parahawking.

Disharoon's love of birds goes back to her childhood. Travels to Latin America provided opportunities to see predatory birds in their own environment.  Her love of working with raptors and teaching brought her to Sky Falconry with her partner, Sellinger.

“We are one of a handful that offers what we do,” said Sellinger of this unique occupation.  They strongly recommend booking online.  Classes fill up.  Visit www.skyfalconry.com to book a class.