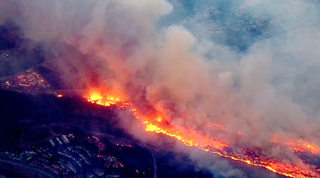 As we move into the new year, Sanchez says 2017 will become “the history that we measure all future years against,” but he adds, “We must recognize that despite the reset, the fire danger in San Diego remains elevated.”

From January 1st through December 31st last year, 9,133 fires under state or federal command burned nearly 1.3 million acres in California.  That total doesn’t include the Thomas Fire, the largest wildfire in California that scorched over 281,600 acres at year’s end.

Cal Fire’s jurisdiction alone included 7,117 fires that scorched over a half million acres in 2017.

The fires have not abated even in mid-winter. Last week alone, 80 new wildfires occurred in California, including 75 in Cal Fire’s jurisdiction.

Sanchez concludes, “CAL FIRE San Diego and San Diego County Fire would like to take this opportunity to remind the public that wildland fire prevention and preparedness are a year-round effort.”

For tips on personal and family preparation, you can visit www.readyforwildfire.org and www.readysandiego.org.

Additionally, CAL FIRE maintains an app for cell phones that can be found by searching “Ready for Wildfire” in Apple or Android app stores.