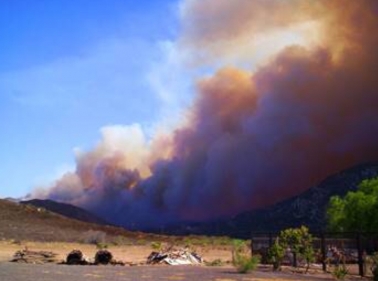 September 11, 2018 (San Diego’s East County) - Living in a rural backcountry is a blessing and a curse. The blessing is seeing an abundance of stars at night, wildlife, and the relative peace and quiet the city can't offer. The curse: some of that wildlife bites, and wildfires are a constant threat for most of the year.

As an East County community member, I have been through several large wildfire:the Doghouse Fire (early 2000's), the Harris Fire (2007), the Border Fire #3 (what we call the Father's Day Fire of 2016), and innumerable other fires that were in the area but did not come close to hearth and home. Two of those large fires killed friends. Each time I have been unable to leave the area, something that firefighters do not want happening. They want us to evacuate to save ourselves and make their jobs easier and safer.

Several groups have arisen in the backcountry over the years, and on Saturday, September 8, 2018 a Wildland Urban Interface (WUI) workshop was hosted by the California Fire Safe Council and the San Diego County Fire Authority (SDCFA) Community Emergency Response Team (CERT) and was administered by the Resource Conservation District of Greater San Diego.

Wildland Urban Interface (WUI – pronounced Woo-e) refers to the zone of transition between unoccupied land and human development. These lands and communities adjacent to and surrounded by wildlands are at risk of wildfires.

Based on the Ready, Set, Go! program, the workshop was designed to guide CERT team and community members in advance planning for a wildfire and techniques used to fight a blaze and to help understand the dynamics of a wildfire.

Our trainer, Metro Arson Strike Team (MAST) Investigator Captain Eric Kelley, began with a brief overview of the program that was generated by the deadly Black Saturday fire in Victoria, Australia in 2009 that took the lives of 173 with about 120 people being killed by a single firestorm. Over 2,030 houses and 3,500 structures were destroyed with thousands more suffering damage with the total area of destruction at approximately 123,552,690 acres. [7]Policies for dealing with brush-fires and management practices across the world took note and began making changes that continue to evolve with each event.

The first video from DisasterSafety.org(IBHS Research lab) showed fire behavior and video #2, Be Ember Prepared showed how many structure fires are started by embers and not the wildfire blaze itself. After each one, I wanted to excuse myself and go home to do more work around the property!

These videos took us into the discussion on Structure Hardening or preparing your property to be as fire resistant as possible. We were shown that although regulations specify vent screening at 1/8”, embers can pass through into your attic or under your home. New vents are being developed as replacements and grant programs are available to help with retrofitting. Defensible space is heavily touted and I can speak from personal experience to say that on two occasions, having the clearance out to 150' saved my home.

At this point, we went on a field trip to two local Fire Safe Council/CERT members homes to show us their efforts at structure hardening. Both properties had defensible space. No foliage abutted the homes. Roof shingles were non-combustible, gutters were metal versus vinyl, porches were made with fire-resistant materials, and metal stairs, railings, and wrought iron patio furnishings were in abundance. Water fittings were fire standard and clearly marked. Propane tanks were set well away from the home and the area around them was clear of debris. Eaves were enclosed to prevent embers from nestling in and sparking flames. Plants directly around the home were succulents and planted in containers. Other native, in-ground plants were far enough from the home and spaced out from each other and clear of trash.

It takes time and money to harden a home to a wildfire, and can't be done in one season, but each homeowner had an extended plan and would do a little at a time to bring their home into a personal compliance that met with fire safety. And that's one part this workshop illuminated was to make a plan and continue to work on it. In my case I am constantly out grooming the property I'm on, clearing the area around the home; trimming away low-lying brush from beside the house, lollipopping the trees (trimming leaves and branches well over six feet above ground so fire doesn't “ladder” or climb up and engulf the tree), raking years of oak leaves into a burn pile well away from habitation.

Once we were back together and had discussed what we'd seen, our next focus was on fire behavior and the elements of a fire. We were shown ignition sources, fuel types, environmental and topographic elements. From there we segued into Wildland Firefight Triage Tactics, and how firefighters determine where to make a stand and what to defend and how.

Among this large amount of information there was the constant thread of having an action plan for evacuation, with their emphasis on Ready, Set, Go! Making sure your paperwork is available. Place all important documents and photos on a flash drive and carry it with you. Carry three day supply of food for family and pets. Have medication ready to go or prescriptions listed. Keep your car backed in for a quick departure. Take a selfie with each animal in case you're in town and they are set free by firefighters.

A primary complaint from members is the inability to return to homes, even after the fire has gone past. There are many reasons given, but that doesn't stop people from being frustrated over their need to return to assess the damage to their homes, make sure livestock has been fed and watered in their absence, and just to be back in their own environment. Fire authorities have been listening and changes are being made.

There is no way I can tell you all of what was learned or discussed, or the myriad of questions asked, as there was a lot of information provided and it was valuable to understand a homeowner's responsibilities, and those of the firefighters out to stop the blaze and protect us. The best thing I can suggest is to find the next available WUI workshop and attend.

I personally want to thank:

And the many others that made this workshop possible.