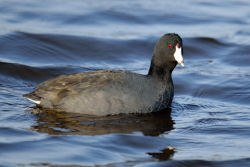 Editor’s Note:  If you have any information on wildlife killed by tax-funded trappers in East County, please send your tips to editor@eastcountymagazine.org.

Reprinted with permission from Voice of San Diego.

By Rob Davis, for voiceofsandiego.org

A country club near Chula Vista’s Eastlake had a gnawing problem.

Coots. Lots and lots of coots.

The small, black bird that looks like a duck was chewing greens and fairways on the club’s golf course, pooping so much near the snack bar that it occasionally closed for cleanups. Birds are attracted to golf courses’ open space, a common problem in heavily developed Southern California. The private country club — records aren’t specific about which one — suspected the coots were hurting their bottom line.

Wildlife Services, an arm of the U.S. Department of Agriculture, was called in December 2009. After the proper permit was secured, trappers working for the federal agency tranquilized and then euthanized more than 100 coots.

Despite assurances that local taxpayers aren’t paying for birds to be killed at private country clubs, San Diego County residents helped foot the bill, according to records Diego obtained from a Freedom of Information Act request. Documents show the coots were killed as part of the county’s $170,000 annual contract with Wildlife Services.

County officials have repeatedly expressed concern to their federal counterparts that coots were being killed under their contract, which is supposed to benefit local agriculture, not country clubs. Federal officials have assured the county that it wasn’t happening.

But Wildlife Services, an agency known for secrecy, has provided so few records to the county documenting its years of work that it would be impossible for county officials to have independently verified what the trappers were doing — even though they were paying them.

An August letter from Wildlife Services’ California director, Dennis Orthmeyer, promised the county wasn’t “directly” paying for coots to be killed on private golf courses or other private property.

County spokesman Michael Workman said his agency has told Wildlife Services it will not pay for coots to be killed on private property.

“We have been assured that this is not happening and have that assurance in writing,” he said in a statement. “But I would like to point out that Wildlife Services is funded by general purpose revenue, which comes primarily from property taxes and golf courses pay property taxes.”

Learning that the work occurred under the county’s contract took months. Most killings in San Diego County happen behind a veil of secrecy — the way trappers prefer it.

Last May, VOSD filed a Freedom of Information Act request for all records that would explain why Wildlife Services kills an average of seven animals a day in the county. The final records were provided in early January, nearly eight months later. Numerous records requested by VOSD remain unreleased.

Wildlife Services’ work across the West, where it kills tens of thousands of animals annually, has been criticized as indiscriminate and inhumane. Like the county government, the public is left to trust that the controversial agency is acting properly, even though signs indicate otherwise. For example: One trapper recently came under fire for posting photos on Facebook of his dogs attacking a trapped coyote in Montana.

An internal Wildlife Services email VOSD obtained explains why the agency prefers to avoid the spotlight. When another reporter contacted the local supervisor overseeing trappers here about coyote problems in Solana Beach, he alerted his superiors and gave this warning:

"Back in the ['90s] we had similar problems in the same area and it quickly got out of control with media and protectionist groups becoming involved, making it difficult for our folks to do their job in the field."

But Wildlife Services goes further than avoiding the spotlight. During the eight-month VOSD investigation, officials repeatedly delayed providing basic information, laughed when asked to disclose its main database tracking killings, failed to release volumes of records and contradicted themselves by claiming information didn’t exist that actually did.

The agency’s obfuscation makes it impossible to quickly learn what it’s doing and why — even though it’s spending the public’s money to do it.

“If they told the truth, and gave the documents that news reporters and others asked for, they'd be out of business,” said Gary Strader, a former trapper. “The public wouldn't put up with it.”

Though we asked for them, the agency didn’t release:

• Reports completed each time a trapper killed a mountain lion or bobcat. (We know these exist because we obtained some through another source.)

• Reports submitted to local government agencies that have hired Wildlife Services to perform animal control. The reports detail what and why the agency killed animals. (We know these exist because we obtained some through local agencies.)

• The locations where it killed 626 coyotes on private property in San Diego County. (The agency said it wouldn’t advance public understanding of its operations to know where it was killing animals on private land.)

• Field diaries that trappers typically keep to track where, why and how they killed animals. (None were found, Wildlife Services said.)

Delays have been a problem for others trying to learn more about Wildlife Services. A Montana environmental group recently won a lawsuit filed against the agency that alleged it was improperly delaying responses to public information requests.

Legislative efforts to reform Wildlife Services’ disclosure have stalled. Rep. Susan Davis, D-San Diego, last year introduced legislation that would’ve required the agency to publicly report where, why and how it killed animals on a city-by-city level. The agency routinely discloses this only at a state level and does not say why many animals were killed.

Davis’ bill, which had bipartisan support, died after being referred to a House livestock, dairy and poultry subcommittee.

Davis said Wildlife Services’ incomplete response to our inquiries and failure to release documents was “unacceptable,” promising to reintroduce her legislation.

"I will press the USDA to be more open,” Davis said in a statement. “Congress must improve oversight of the Wildlife Services program and ensure that the USDA is using tax dollars efficiently and appropriately."

When we set out last May to answer basic questions about Wildlife Services, we wanted to know:

• What animals were killed and how (this information was provided);

• Where and when they were killed (partially provided; hundreds of locations were kept secret);

• Why each was killed (partially provided; explanations for thousands of killings were not provided, however);

• How many animals were killed accidentally (provided: 19 in total) and why (not provided).

Eight months later, we’ve developed a collection of anecdotes about Wildlife Services’ work. We learned that many animals were killed to protect endangered species like the California least tern, which live in the county’s remaining small patches of undeveloped coastline. We learned why some mountain lions, bobcats and coyotes were killed.

But because the agency didn’t disclose all the documents we sought, it was impossible to completely review all its activities in San Diego County.

Our Next Step: I plan to formally appeal Wildlife Services’ incomplete response to my request and compel disclosure of the records the agency should’ve released months ago.

Rob Davis is a former senior reporter for Voice of San Diego. He is currently a freelance writer traveling through South America. He can be reached at robdaviswrites@gmail.com.