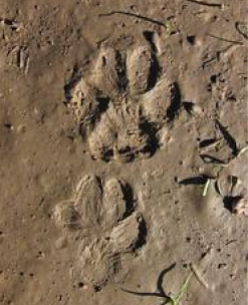 By Miriam Raftery
Photo: Mountain lion tracks, CC by SA-NC
May 28, 2019 (Rancho Peñasquitos) – After yesterday’s attack on a 4-year-old boy at the Rancho Peñasquitos Canyon Preserve run by the city of San Diego, wildlife officers investigating at the scene spotted mountain lion tracks and were approached by a lion that appeared to have little fear of humans. This is abnormal behavior for normally reclusive mountain lions, so the officers shot and killed the lion to protect public safety, according to the California Dept. of Fish & Wildlife.
It is not yet confirmed that this is the same lion that attacked the child, who suffered non-life threatening head injuries. DNA samples from the boy have been shipped to a CDFW Wildlife Forensic Laboratory in Sacramento along with the lion carcass for a necropsy and DNA analysis to confirm whether this was the animal responsible for the attack. The lion will also be tested for rabies.
Kirsten MacIntyire at CDFW confirms the lion was a female but that there were no signs of cubs.
“The boy was part of a group of 11 people recreating in the park at the time,” a CDFW press release states. He was treated by San Diego Fire-Rescue personnel and transported to a hospital.
Although hiking in mountain territory is common, attacks by mountain lions remain rare.  In California, only 15 documented attacks occurred from 1996 to 2014, of which three were fatal.
To reduce your risk, don’t hike alone and keep children close at hand. If you see a lion, never turn your back or run, which makes a lion believe you are prey and can trigger an attack.  Instead raise your arms and shout.  Carrying bear spray can deter an aggressive lion, as can throwing rocks or other objects.
Several thousand mountain lions are estimated to reside in California, though most are elusive and rarely seen.